Tale Time – Who is more Merciful? 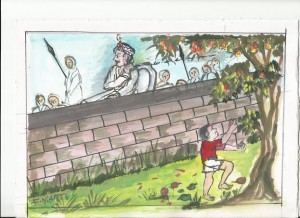 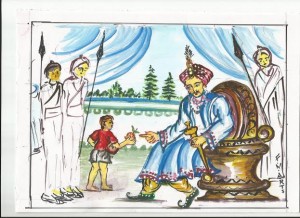 This story goes back to those days when there used to be kings and kids used to pluck fruits by pelting stones.
Once a boy was throwing stones at ripe mangoes hanging from the tree in an orchard. It so happened that the convoy of the King was passing by the fencing wall of the orchard. A stone struck the king’s turban while flying back to the ground. The King was badly shaken by the incident and ordered his attendants to present before him the stone-thrower.
The soldiers in the convoy went around and caught the boy and brought him before the King.
The King told him: “You will be punished severely for the act of throwing stones at the wayfarers”.
The boy was though greatly shaken for being brought before the King, gathered courage and replied: “Your Majesty! I never intended to hurt anyone. It just happened that a stone flew away out of the fence and struck you. But I have something more to tell you. The mango tree which has suffered so many hits from my stones has never punished me. Rather it has always rewarded me with sweet and juicy mangoes. I think the mango tree seems to be kinder than you as it has never punished me while you intend to punish me for the unintentional act.”
The witty reply pleased the King and he ordered the kid to be released.
(Translated from Urdu by Maqbool Ahmed Siraj) n