Tedi and Friends in the Magic Terrace

The rainy season was setting in. One night, it rained very heavily. Tedi was all by himself in Dolcy’s room. 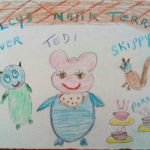 Dolcy is a cute little kid and his round face is always shining because he prays to God everyday as soon as he wakes up and before tucking himself into bed. And, he also prays to God before and after meals.
Dolcy has his own little room, which is called “Magic Terrace”. It has lots of books as Dolcy loves reading.
This   summer,  Dolcy packed his knapsack and set off to  spend time on a farm away from the city . On the farm, little Dolcy played with Sheeshu and Ponytail, two lovely donkeys. He also spent time with Geeni the goose and watched the sheep munch on fresh green grass!
Tedi was Dolcy’s favourite teddy bear.  Dolcy had left Tedi to mind his room while he was at the farm.
The rainy season was setting in. One night, it rained very heavily, with lots of lightning and thunder. Tedi was all by himself in Dolcy’s room. He was about to go to bed when he spotted two round lights at the window.
“Goodness gracious, wonder what that is!” thought Tedi. As he drew the curtains and peered out, guess what he spotted? A big barn owl! At first Tedi was a little frightened, because he had never seen an owl so closely before.
‘Oh dear, don’t be scared. I’m Oliver, and I’m quite harmless”, the owl said. “The lightning hit the branch on which I was sitting. So, could I please stay here till morning, when the rain might stop?”
Tedi scratched his head with his paw and thought for a while. He noticed that  Oliver looked very cute”with his big round face and eyes like saucers and two tiny ears that were stuck on his big head.
Tedi felt sad that Oliver had no branch to sit on. He said to him, “Sure Oliver! This is Dolcy’s room and I’m minding it till Dolcy returns from the farm. You  could certainly stay here till morning. I know Dolcy will be happy when he comes to know.”
“Thank you Tedi,” said Oliver as he flew down and landed on Dolcy’s cot and tucked himself under the quilt very happily!
The next morning, the sun shone brightly. Tedi set about making breakfast for Oliver and himself in Dolcy’s toy- cooker. Soon, a delicious porridge was ready! Tedi and Oliver sat on toy chairs and had a hearty meal!
Just then, Sally the squirrel peeked through the window. When Sally spotted Tedi and Oliver munching porridge, she called out, “Hey Tedi! Could my friends and I have some porridge too? It’s so cold in the rain outside!”
“Sally! Sure! Do come in, but please wipe your paws on the mat outside,” said Tedi.
Sally neatly folded her bushy tail and scampered inside the Magic Terrace, along with her friends Skoppity,  Sinda, and  Selfie, all three bushy-tailed squirrels like her.
“Yummy, Yummy! Yummy!” the squirrels squeaked as Tedi served them hot porridge in little cups.
As afternoon set in, Oliver, Tedi, Sally and her squirrel friends began to feel sleepy. They happily curled themselves on Dolcy’s cot and fell fast asleep.
Shortly afterwards, Kaw-Kaw, the big black crow, swooped onto the terrace to drink some water from the water bowl Peering into Dolcy’s room, he spotted Oliver and the squirrels fast asleep.
“Oh my! I am tired flying. Let me take a nap too” Kaw-Kaw thought to himself. And then he joined the others in Dolcy’s bed!
And do you know what? All of these wonderful birds and beasts are still in the Magic Terrace! Dolcy  may soon return home after the summer holidays, and when he sees them all in his room what a big surprise he’s going to get!