Islamic Voice 0 March, 2016 12:00 am
Intoxication of Egoism
Do You Know
We are Never Self-Sufficient 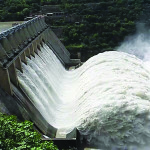 Water is the greatest Divine gift to the humanity and to the planet Earth. The life on this planet owes itself to presence of water. Water is among three things freely available to human beings, the other two being air and sunshine. All three are critically important to sustaining life. While air and sunshine continue to be freely accessible, water is not accessible freely to all. It reaches us via a network of pipes, storages, cleaning systems and is transported to overhead tanks through pumps and channels etc. In this glossary we focus on a variety of terms that are involved in human management of water.

Dam: A dam is a barrier designed and constructed to contain the flow of water. It is often built across the rivers when they pass between two hills. The dams have several purposes e.g., to check floods, to collect water for irrigation, water supply and for generating electricity. (Ø¨ÙØ¯)

Reservoir: A natural or artificial place where water is collected and stored for use, for supplying a community, irrigation etc. (Ø¢Ø¨Û Ø°Ø®ÛØ±Û)

Desalination: Removal of salt (sodium chloride) and other minerals from the sea water to make it suitable for human beings or for industrial use. (ØªØ¨Ø®ÛØ±Û Ø¹ÙÙ  Ø³Û ÙÙÚ©ÛÙ Ù¾Ø§ÙÛ Ú©Ù ÙÛÙ¹Ú¾Ø§ Ú©Ø±ÙØ§)

Fountain: An ornamental structure in a pool or lake from which one or more jets of water are pumped into the air. (ÙÙÙØ§Ø±Û)

Reverse Osmosis: The most common desalination methods in which salt water is forced through a membrane that allows water molecules to pass but blocks the molecules of salt and other minerals.( Ø¹ÙÙ Ù ÙÙÙÙÙØ°)

Waterworks: The system of reservoirs, channels, mains, and pumping and purifying equipment by which a water supply is obtained and distributed to a city. (Ø´ÛØ±Û Ù¾Ø§ÙÛ Ú©Û ØªÙØ³ÛÙ Ú©Ø§ ÙØ¸Ø§Ù)

Overhead Tank: A tank raised over pillars where water is pumped before it is distributed to a locality. (Ù¹ÙÚ©Û)

Sump: A depression or tank in the ground at the bottom of a shaft where water collects before it is pumped away. (Ø²ÛØ± Ø²ÙÛÚº Ø¢Ø¨Û Ø°Ø®ÛØ±Û)

Water recycling: Since water is a precious liquid, the wastewater or sewage is now treated to remove solids and impurities, and used in irrigation, to recharge groundwater aquifers, to meet commercial and industrial water needs, and for drinking. (Ú¯ÙØ¯Û Ù¾Ø§ÙÛ Ú©Ù ØµØ§Ù Ú©Ø±Ú©Û Ø³ÛÙÚØ§Ø¦Û Ú©Û Ù Ø§Ø¦Ù Ø¨ÙØ§ÙÛ Ú©Ø§ Ø·Ø±ÛÙÛ)

Potable water: Water that is of adequate quality to be used for human consumption. (Ù¾ÛÙÛ Ú©Û ÙØ§Ø¨Ù  Ù¾Ø§ÙÛ)

Waterwheels: These are machines that convert the energy of flowing or falling water into power that can be used to do other tasks or large wheels made of wood or metal that have many blades or buckets along the outside edge to capture the power of moving water. (Ø¬Ù  Ù¾ÛÛÛ)