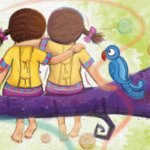 By Mesha O
Salma and Sita were inseparable friends. They lived in the same building and studied in the same kindergarten. The two girls insisted on wearing identical clothes, and shoes, too, which meant that their mothers had to go together to shop for them!
Salma and Sita lived in a crowded part of a large town, which was lined with busy lanes that were almost always clogged with traffic. There was no playground in the area, and no park too. But just outside their building was a dusty plot of land, which was empty except for an ancient banyan tree, which had long aerial roots that hung down like thick ropes. It was home to numerous birds, a large family of squirrels and an occasional cat or two. At one time, it had hosted half a dozen beehives, but the bees had shifted elsewhere, in search of flowering plants.
Every afternoon, after they had drunk their milk, Sita and Salma would skip off into the plot to play. Hugging the trunk of the great banyan tree, they would pretend they were climbing Mount Everest”which, as you might know, is the tallest mountain in the world! How they loved sitting in the shade of the tree, singing songs or flipping through their picture books or chatting about this and that! There they would munch on cake or samosas or whatever else their mothers had made that day for tea. Spotting the many birds that hopped about in the arms of the tree, they’d call out to them, wishing them a good afternoon and asking them how they were doing and if they had eaten well. Sometimes, they would bring along peanuts, which they would lay out at the foot of the tree for the squirrels. Once in a while, they would carry bits of sugar to feed the ants that busily crawled about.
One afternoon, the girls were leaning against the tree playing their favourite word game when a bulldozer noisily made its way into the plot, sending up huge clouds of dust that made them cough badly. A man hopped out from out of the vehicle and walked towards the tree. He took out a measuring tape, which he began to wrap around the tree.
Just then, Sita’s mother called out to the children, “Come in, girls! This man has to do his work. Come home now!”
When the children got to Sita’s house, Sita’s mother explained to them what the man was up to. “He’s come to measure the tree,” she said. “Tomorrow, he may demolish it with his bulldozer.”
“But why Mumma?” Sita asked.
“They plan to replace the tree with a fountain,” Sita’s mother replied.
“A fountain?” said Salma, astonished. “But Aunty, that tree is where we play every day!”
“Yes, Mumma!” cried Sita, “And it’s home to so many birds and squirrels and many, tiny little insects also!”
“They’ll all lose their homes if the tree is pushed down,” Salma said. “Where will they go?”
“Mumma, please Mumma! Do something! If you love me, you won’t let the tree go like that”, said Sita, tears streaming down her cheek. “Promise me!”
“Yes, Aunty, you have to! You have to!” said Salma, who began to cry so badly that Sita’s mother rushed to circle her in her arms.
“Okay children,” said Sita’s mother. “I’ll try my best. God has blessed that beautiful tree as a home for so many creatures, and it would be awful if it’s brought down. I know how much you and your bird and animal friends love it. Let me think of something we can do about it.”
Later that day, Sita’s mother met Salma’s mother to discuss the matter, and the two of them hit upon a very clever idea.
Do you know what they did?
They prepared a letter where they mentioned about the plan to demolish the tree and replace it with a fountain and explained why it wasn’t a good idea at all.
Guess in whose name they sent the letter: their little daughters’!
They attached a big, smiley picture of the two girls up in the tree so that those who read the letter could know how important the tree really was to them.
They sent the letter to their friends and neighbours, and to some influential people who they thought could help ensure that the tree would not be bulldozed.
The next day, the letter was published in many newspapers, so that almost the whole town came to know about the plan to bring down the tree and about the two little girls who did not want that to happen.
And do you know what happened next?
So many people came out to support Salma and Sita that the men who wanted to demolish the tree down had to call off their plans!
You can’t imagine how happy and grateful Sita and Salma were at that! They requested their mothers to email a ‘Thank You’ note to everyone who had come out to help them protect the tree. And, a few days later, their mothers organised a little tea party for all these many people, who were eager to meet the two brave little girls who had done such a wonderful thing.
Guess where the party was held!
Under the giant banyan tree, which was large enough to accommodate over a hundred people!
You can imagine what a wonderful time everyone had that day!