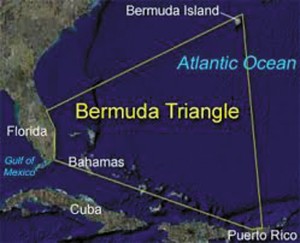 The disappearance of the Malaysian Airlines MH370 has set the tongues wagging about something like the Bermuda Triangle where ships and cruises disappear mysteriously. It is an area in the Atlantic Ocean between Bermuda Island, Miami in Florida in the United States and Peurto Rico, a group of islands which are part of the US.
Columbus claimed that he saw a “great flame of fire” falling into the seat in this area during his first trip. In recent age, a training mission of five US bombers vanished off the Florida coast in 1945. A search plane sent to trace them also disappeared. Nearly 100 boats and aircrafts have also been lost. A series of newspaper article and the famous novel The Bermuda Triangle by Charles Berlitz have popularized the mystery. But the fact is that thousands of ships pass through the area and an equal number of planes also fly past it. However the mystery over some strange disappearances survives.