What is Magna Carta? 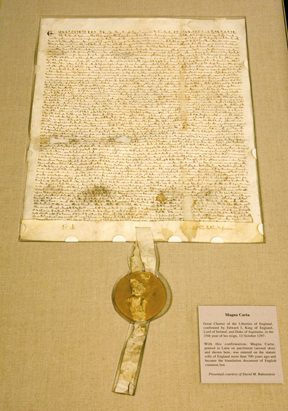 Magna Carta or the Greater Charter is the primary form of Constitution writing down rules according to which a King would rule. It was signed in 1215 by King John of England when feudal lords of the country wanted him to restrict his powers and lay down rules by which he would rule and allow freedoms to the people. The lords made him declare that no one would be punished except through the law of the land. It was amended several times later. Only three clauses of the original Magna Carta remain part of the unwritten Constitution of England today. It helped England to establish the rule of law in the United States as it was used as a model. It had great influence in formation of the American Constitution too. It also freed the Church from the control of the King and laid down that all taxes would be levied only with the consent of the Parliament. In short, it put an end to the old adage ‘Word of the King is law’.