Who was Genghis Khan?

Islamic Voice 0 December, 2012 12:00 am
British Toy Store With a Difference
Dishonesty Doesn’t Pay
Tedi and Friends in the Magic Terrace 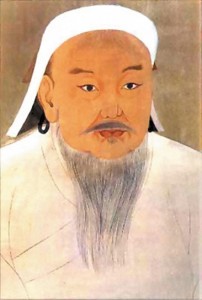 Genghis Khan, the Great emperor found the Mongol Empire. Many people thing he was a Muslim. He was not. ‘Khan’ meant empire in the Mongol language. He is guessed to have been born in 1162 and died in 1226. His lifespan was very brief. But he carved out the largest contiguous empire in history of the world which however reached the maximum size after his death. He united Mongol tribes to improve their chances in battle. He had power over more the world than any other conqueror in history. Despite his ferocity, the people in the conquered territory he ruled were given freedom of religion and were allowed to use efficient trade routes. By the end of his life the Mongol Empire had occupied a considerable part of Central Asia and China. After his death the Mongolian empire was ruled by his son Ogedei Khan and grandson Kublai Khan. Genghis Khan was buried in an unmarked grave at an unknown location.