Binky remembered her mother telling her that every creature, big and small, was made by God.
A Staff Writer 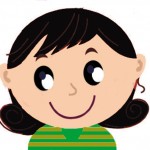 Little Binky sat in her plastic chair in the garden all by herself. How awful she felt! Her friends had gone together to see a movie and had forgotten to take her along. She had waited all week to see the new release. She had no idea how she was going to entertain herself for the next three hours till her friends got back. It was really very distressing, and she was very cross.
Just then, Binky spotted a column of ants speeding past her feet. She had seen ants before, of course, but she had never bothered to observe them closely. They were just too unimportant to pay attention to, so she had thought. But now since she had nothing to amuse herself with, her attention was drawn to the little creatures.
Binky bent down closer to get a better view of the ants till she was almost flat on the ground. ‘My! What tiny feet and yet how fast they move! And with what amazing energy!’ she exclaimed.
The ants raced along in one straight line, in perfect discipline. None tried to overtake the others, and if anyone bumped into another by mistake, they politely bowed to each other and moved ahead without making any fuss. ‘Human beings could learn a thing or two from that!’ Binky chuckled to herself.
Where were the ants heading to? Binky was curious to see what they were really up to. She got to her feet and ran along the line of ants. Their trail ended at a half-eaten apple lying outside her bedroom! Binky had thrown the apple that her mother had given her out of her bedroom window. The discarded fruit was now swarming with literally thousands of ants!
How had so many ants come to learn about the apple? They had probably smelt it from far off. That meant that they must certainly have very powerful noses, Binky mused, certainly much more powerful than human beings! She tried to see what an ant’s nose looked like, but the little creatures just would not stop rushing about for even a moment, so that each time she looked closely at a particular ant, hoping to spot its nose, it whizzed past her.
‘And if they’ve got tiny feet and tiny noses, they’ve probably also got really teeny-weeny eyes, a stomach, and a heart, too, all packed in such a very small body!’ Binky murmured.
Binky remembered her mother telling her that every creature was made by God, and that, therefore, one must love and respect them all. That’s why her mother made it a point to feed cats and squirrels that abounded around the house. Although her mother had not mentioned ants, it struck Binky that they, too, needed to be treated with compassion and love.
‘If God’s made them, He must have done so with a purpose,’ Binky thought, ‘and so they have just the same right to live as humans do’. She promised herself to henceforth walk with care so that she did not squash an ant under her feet.
Just then Binky heard her friends call out for her. ‘Binky! Binky!’
Binky’s friends were back and had come to her house to tell her how sorry they were for having forgotten to take her with them.
‘What an amazing movie it was!’ cried Timby.
‘Such amazing beings from a very far-away planet!’ said Chimpu.
‘But that’s just a make-believe movie that you saw,’ Binky replied as she explained to her friends all about how she had spent the afternoon. ‘While you were away, I had the time of my life playing with the most delightful creatures you could ever imagine! I must thank you for having forgotten to take me along for the movie! I wouldn’t have had even half as much fun if you hadn’t!’