Why are the forests necessary for our environment? 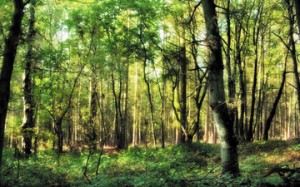 Forests are like lungs for the environment. But there is a difference between human lungs and them. We take oxygen and give out carbon dioxide. The trees consume the carbon dioxide and emit oxygen. Thus, they replenish the oxygen being consumed by the human population.
If the forests are cut down, there will be no natural source to compensate the supply the oxygen.
The rainforests are also essential for our climate control. They gather moisture and release a part of it in the atmosphere and thereby control the movement of air masses.
Rainforests cover only 6% of the earth’s surface. But they are home to nearly half the species of the plants and animals found on the earth. If these forests are lost, the damage to plant and animal life will be unimaginable.