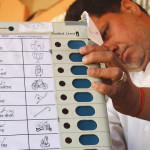 Election: The process of choosing law-makers and their head from among a variety of candidates.
(انتخابات)

Byelection: An election held in between general election to fill a vacancy in legislature caused due to death or resignation of a legislature. (ضمنی اِنتخابات)

Manifesto: A declaration of principles, policies and programmes by a political party made prior to elections.
(انتخابی منشور)

Constituency: The area or body of voters represented by a legislator. (انتخابی حلقہ)

Ballot: The system of voting secretly and in writing on a particular issue.
Referendum: The system of asking people to vote on a proposal in order to determine choice of people on an issue before making law. It is also called plebiscite. (استصوابِ رائے)

Presiding Officer: An officer who supervises the conduct of voting. (پریسائڈنگ افسر)

Returning Officer: The officer in-charge of counting of votes who declares the names of the successful candidate.
(رٹرننگ افسر)

Delimitation: To establish limits or demarcate a constituency for electoral representation. The constituencies for Parliaments and Assemblies are freshly demarcated after every 25 years in India. This is done to ensure that these constituencies are well balanced in terms of number of voters. (انتخابی حلقوں کی تحدیدِ نو)

Proportional Representation:
This system varies from country to country. In some countries, the people vote for parties and parties in turn nominate the members to the legislature in proportion to their vote in an election, e.g., If a party gets 45% of the popular vote, and the legislature has 200 seats, this party will be entitled to nominate 90 members for the house. This system accords priority to the political party. In some places, the communities are assigned the number of seats in proportion to their share in population. (متناسب نمائندگی)

First-past-the-post system: Major democracies like the US, the UK and India follow this system. Under this system, the person who tops in matters of taking votes is elected to the legislature. It is a winner-takes-all system while all other candidates who may have together received more than 50% votes get nothing. (اس سسٹم میں جس اُمیدوار کو سب سے زیادہ ووٹس ملتے ہیں، وہ کامیاب قرار دیا جاتا ہے چاہے بقیہ اُمیدواروں کو نصف سے زیادہ ووٹس ہی کیوں نہ ملے ہوں)

Dual member constituency: A system in which the winner as well as the person who was runner-up, both are elected to represent the constituency. Some countries such as Mauritius have this system. It is done in order to ensure maximum representation. (دو اراکین والے حلقے).

Run-off Voting: It is a system of voting system in which voters cast their single vote for one among the many candidates. If no candidate receives the required number of votes (which is usually 50%), a second ballot is held in which top two vote gainers of the first round are allowed to run. France, Afghanistan, Austria and several countries elect their president via run-off voting which ensures that the elected person always gets a majority.
(وہ طریقۂ اِنتخاب جس میں پہلے راؤنڈ میں کسی بھی اُمیدوار کو 50فی صدووٹ نہ ملنے پردوبارہ ووٹنگ ہوتی ہے جس میں صرف وہی اُمیدوارحصہ لیتے ہیں جن کو سب سےزیادہ ووٹ ملے تھے)