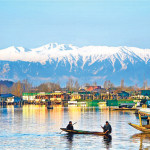 The resilience of a Kashmiri is limitless bordering even on total passivity. Of course that is the reason it is named as the valley of the saints in Kashmiri!
By M. Ashraf

In ancient times, Kashmiri Society used to be very interactive and sociable. It also used to be very lively and humour loving. According to a British writer, one could get the best out of a Kashmiri with a kind word and a joke. In spite of the worst suppression from external rulers, the Kashmiri humour and liveliness has not withered. In some of the worst situations, they have not abandoned their sense of humour. This aspect of their character still remains unchanged. Kashmiris are also famous for giving nicknames to one and all! Yes, people sometimes get shocked and dumbfounded after every bad episode but they soon recover and carry on. Anyone who visits Kashmir after such episodes like a political turmoil or a catastrophic natural disaster would not believe that these are the same people who have gone through such tribulations! The resilience of a Kashmiri is limitless bordering even on total passivity. Of course that is the reason it is named as the valley of the saints in Kashmiri!
The social interactions have always continued in spite of the modernization and technological development. Till 1947, the main interaction with outside world was through the Jhelum Valley Road and Rawalpindi was the main contact point. There were caravans coming and going to Central Asia like Tajikistan and also to Chinese Sinkiang province. There was very little interaction through the Bannihal Road which used to be closed for six months of winter.
The partition and the subsequent conflict isolated Kashmir totally and the only interaction was through the Bannihal Road. The start of air services in subsequent years increased outside interaction. Still Kashmiris did not travel much. This was very true till late eighties. However, the turmoil of nineties totally changed the situation.
Two important things happened which had profound and far reaching impact on the psyche of Kashmiris. Pandits had to go out involuntarily which completely changed their outlook and social well-being. The Muslims went out voluntarily to escape the troubles at home as well as to look for newer pastures for their business and means of livelihood. As regards living in Kashmir itself, there was very significant social impact of the then prevailing situation. The entire social interaction came to a virtual halt. This was the result of continuous shut downs and official curfews. The unending cordon and search operations of the security forces looking for militants forced people to stay in their own homes. Life would virtually shut down just before the descending of the darkness in the evening. This continuous involuntary confinement totally disrupted the normal social interaction. There were only two occasions on which people would meet each other. In a marriage function or during a funeral!
For the intellectual class there was a total break in any meetings. Till nineties, one of the central meeting points for the intellectuals used to be the India Coffee House. People used to sit here for hours on end discussing all topics. The journalists would meet here to exchange information. The closure of the Coffee House deprived people of a central meeting point. This continued disconnection remained even after easing of the situation. As a matter of habit, people got stuck in their own homes. The usual visits to friends and relatives also declined to a great extent. The coming of the internet with umpteen social interactive sites like the Facebook caused total confinement of people to their homes. They could chat, speak or even debate through these electronic information highways. There was no need to take the trouble of moving out and meeting each other. People started turning into “couch potatoes”! This suited the authorities as going out to express one’s views could result in turmoil.
Then came the great flood. People were suddenly and in a violent manner physically displaced from their “couches”! There was total disruption and displacement. They had no alternative but to take shelter with relatives and friends. It was a forced social interaction. Interestingly, most of the elite living in posh areas usually called the “Civil Lines” was involved in this forced displacement. In some places, four to five families were staying in a single house. The relatives and even friends who had not seen each other for a long time got bundled together! This forced displacement also compelled people to look for their relations as no one knew where his or her relatives had taken shelter. The things were rendered more difficult due to break down of the communication channels. This forced people to physically search for their near and dear ones in different places including the relief camps! In the process there was more physical interaction. Additionally, the relief camps in different parts of the city also became the centres for social interaction.
Now the moot point is whether this forced social interaction will revive the age old traditional social set up in Kashmir? It would be a very positive and welcome development if it does. Interaction at all levels is very healthy for the orderly growth of a society. The social interaction should not only be revived between relations, friends and intellectuals in general but between the people of different areas and regions. It may not necessarily start with political issues but a good beginning could be the discussion on environment which we have miserably and wantonly fiddled with, resulting in this massive flood of the century. One could demand a commission to pinpoint the criminal negligence which resulted in such massive devastation. Let us hope the broken social fabric gets revived soon.
(Mohammad Ashraf, I.A.S. (Retired) was former Director General Tourism, Jammu and Kashmir)
(Countercurrents.org)