Supper for the Soul

Islamic Voice 0 October, 2016 12:00 am
White Pencil’ Set to unleash Creativity
No One Is Safe until Everyone Is
Children’s Bookmaking Workshop – Publishing Comes to Chennai School

Swabhimaan’s initiative of food and groceries distribution in the poorest of the poor slums in Bengaluru, gives food for thought, for individuals and corporates to emulate this noble work. 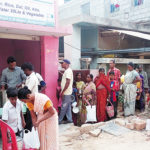 Drop by just before evening on any evening from Monday to Saturday at LR Nagar, a sprawling slum on the fringes of Koramangala, in Bangalore, and you will find a line of people, holding pots and plates in their hands, patiently waiting. Many of them are elderly. Most look emaciated and sickly. They are among the poorest of the poor in what is among Bangalore’s economically poorest localities.
A van trundles along the crater-filled path, a poor apology for a road, that cuts through the slum. The doors of the van swing open and a team of volunteers rushes to draw out enormous steel containers that are filled to the brim with food. The volunteers”mostly middle-aged men, but sometimes school-going children”get busy distributing the food, stopping to exchange a friendly word or joke with the people who line up to take their dinner”for many of them, their main meal for the day, which some might also have for the next morning.

Distributing Free Groceries
This initiative is the brainchild of 60 year-old Venkatraman Iyer (or Venkat), who, along with his wife Vijaya, manage Swabhimaan, a registered charitable trust. “In 2009, with help of Mpower Foundation, we started distributing free groceries in and around the area”sugar, daal, rice, wheat and oil”once a month to some 200 economically very vulnerable families, enough to last a family of five, for a week.” Venkat says. Today, Swabhimaan provides free groceries to some 450 families, funds for which come from individual donors. “One of our donors is a Muslim woman who sends 50,000 rupees a month to us from her zakaat money for this project”, Venkat adds. “I’ve never met her myself, but she heard about our work from a relative of hers who knows about it and she decided to support it.”
Swabhimaan’s food distribution programme in the area, launched last September, was triggered off by a touching incident, as Venkat explains:
One day, I saw one of our volunteers, Khader, carrying two packets of food. I asked him where he was going. He replied that he was going to give food to two elderly, homeless women who lived under a staircase and had no family. Apparently, he was doing that every day for three months! I was really taken aback! I said to him, ‘You yourself are very poor and are out of work and have children to feed. You don’t have enough food in your home, how can you feed these women every day?
Khader’s reply really struck me. He said, ‘If my parents were alive, wouldn’t I feed them? I’m feeding these two women thinking that my parents are alive and that I’m fulfilling my responsibility of caring for them.’
Isn’t that amazing”the way he looked upon those two women like his own parents?
I asked him if there were more people like these two women in the area. He said there were many. That is how we came up with the idea of providing a nutritious meal to such people on a regular basis.
To begin with, Venkat contacted friends and relatives to contribute money, on an occasion like a birthday or wedding anniversary, to cook and distribute food to people in the area on the weekends. Beneficiaries were carefully selected by Swabhimaan’s team of dedicated volunteers from among the most economically-needy families.

Access to Proper Nutrition
As the work expanded, Venkat realised that the problem of access to proper nutrition in the area was acute, especially among children and the elderly. That led him to contact a software company for help. In many such companies, after lunch is served in served, he says, a significant amount of good quality, nutritious food is left over on any given day, which is thrown away. “I met the company’s Corporate Social Responsibility team and offered to arrange to have the food picked up regularly and given to the poor in the area where we work, and they readily agreed,” says Venkat.
The company didn’t want to take the risk of food getting spoilt and people falling sick from eating it. “Distributing food was a big risk. I consulted my wife about the matter, and she said we should take the risk since our intention was good,” Venkat says. “We signed an agreement with the company to the effect that the company would not be held responsible in case anyone fell ill on eating the food.”
It is a year since Swabhimaan launched its food distribution programme, and the number of companies involved in the programme has gone up to three. The programme now benefits some 150 families, or around 500 people. Food collected from the companies is delivered every day, from Monday to Friday. With money given by individual well-wishers, food is cooked in the area itself on Saturdays (a contribution of Rs. 3000 is enough to cook food for 300 people, Venkat says), while on Sundays, food is arranged by ‘Robinhoods’ and ‘Let’s Feed Bangalore’, two groups of professionals who reach food to the hungry.

Sharing in their Common Poverty
“Our beneficiaries are among the poorest people in the area, living in really sub-human conditions” Venkat says, “including widows, divorced women, very sick or old people, some who have no facilities to cook in the hovels in which they live. They are from different communities”Muslims, Hindus, Christians and others” and have traditionally lived together in great amity, sharing in their common poverty. The fact that they come every day and stand in a queue to wait for their turn to pick up food tells you that these people are really very hungry. Sometimes, the food is delivered late, but they still wait”for even more than an hour.”
36 year-old Chand Pasha is a member of Swabhimaan’s team of dedicated volunteers. He earns his livelihood buying clothes in bulk and retailing them on the footpath. Even though he isn’t paid for volunteering with Swabhimaan, he’s there most days of the week to help out with distributing the food. “When I see others in need, I feel like doing something to alleviate their problems,” he explains. “It gives me great joy.”
“There are dozens of slums like this one in Bangalore, and many more such hungry and deserving families who need to be supported to ensure minimum nutrition for their children and food on their plate for the elderly and the sick,” Venkat explains. “We are working in just one slum, and that too with not all the families there that are in need. If others want to replicate this work in other slums in Bangalore, we’d be happy to help. We’d be glad, too, if anyone wants to come over to see our work, to help out with food distribution and to get to know about the lives of the people we work with.”
(Venkat can be contacted on [email protected]
Cell number: 09945436757)
(www.swabhimaan.org)
If you’d like to help this initiative, see https://www.fueladream.com/home/campaign/380