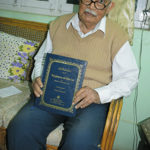 The English translation of the Tarjuman ul-Quran, the literary masterpiece in Urdu by Maulana Abul Kalam Azad, has been translated into English by Dr. Sheik Ali, a historian based in Mysuru and published by the Darul Umoor in Srirangapatnam.
The original Urdu Tarjuman ul-Quran was published by Sahitya Akademi, Delhi, in 1968, ten years after the passing away of Azad, who was the first Education Minister of independent India and a stalwart of the freedom movement. Tarjuman ul-Quran is an Urdu commentary on the Holy Quran penned by Azad between 1915 and 1945, a tumultuous period during which he was incarcerated by the British administration several times for several years. Azad had expressed a desire to bring out its Hindi and English translations soon in order that more people could access the meaning and significance of the Divine message.
Prof. Sheik Ali, now 93, who is former Vice-Chancellor of Mangalore and Goa Universities, took up the work last June and finished the translation in six months. The volume runs into 350 pages.

Bulwark for Reform
Maulana Azad was a staunch follower of Mahatma Gandhi and an uncompromising opponent of Partition. He wanted Muslims to accommodate changes in themselves and embrace pluralism and see the beauty in all faiths and cultures. He was keen to initiate a reform movement among Muslims. He perceived that distance from the Quranic text and the fossilized curriculum of the madrasas stood in the way of the community’s progress and were causing inertia and stagnation. He considered these the greatest hindrances in progress towards reform. He began to write and serialize the Tarjuman in the Urdu weekly journals Al-Hilal and Al-Balagh, edited and published by him from Calcutta. These were in the forefront of championing the cause of the freedom for the country.

Prolific Writer
Maulana Azad was an exceptionally prolific writer and was endowed with a new vision for the community. His commentary on the first chapter of the Quran i.e., Surah Fatiha, ran into 554 pages, with another 116 pages of preface. It was first published by Sahitya Akademi in 1968 with a foreword by then President of India Dr. Zakir Hussain. Describing Maulana Azad’s delightful narrative, Hussain said that he was aware of the spirit of the modern age and explained the intentions of God’s word in such a way that it satisfies the critical mind of the new times.

Unity of Faiths
Sheik Ali says Azad’s philosophy of wahdat e-adiyan or ‘unity of religions’ draws on the ideological crux of all religions and holy scriptures, be they the Torah, Bible, Upanishads, Vedas, Githa or Avesta. Sheik Ali says that Maulana Azad’s discussion about the concept of God is encyclopedic in bringing together insights from all the great religions of the world. According to Dr. Ali, Azad wrote a great deal about the essence of various religions. He says that Azad perceived balance and order to be the founding elements of Confucianism, patience and compassion that of Buddhism, tolerance and humanism of Hinduism, truth and non-violence of Jainism, equality and brotherhood of Islam, and, love and service to humanity of Christianity.

‘Mother of the Book’
One knows too well that Surah Fatiha has only seven verses and it has been described as Umm ul-Kitab (‘Mother of the Book’). It is in the form of an invocation for the Divine blessings and has been prescribed to be read in each part of the five-time namaz. There would be perhaps hardly any Muslim who would not have committed this surah to memory.
According to Dr. Sheik Ali, Azad was impelled to dredge the depths of the Divine attributes contained in each and every term used in the chapter. Its message could be summarized in ‘being good, doing good; living wisely, justly and generously; fearing retribution; seeking Divine assistance; developing devotion to God; following the path of those who were virtuous and eschewing the path of deviants and delinquents’.
Azad faced several setbacks while he wrote the Tarjuman ul Quran. The police under the British Administration once lifted all the manuscripts found in his house in their search for some clue or proof of his anti-British writings. Thus, a considerable part of the work got decayed and destroyed, in the process forcing him to take up the assignment afresh.

Verbal Flourishes
According to Dr. Sheik Ali, Azad’s verbal flourishes in Urdu often posed difficulty in transferring them into English. Sentences like Sarzameen e-Faraan ne jab niqab ulta to jamaal e-haqeeqat ka pehla nazara Surah Fateha thha. (Ali’s translation into English reads: ‘When the veil was lifted from the eternal face of Divine Reality, the very first sight was the Divine radiance’). The simple prose by Dr. Ali makes equally delightful reading and lucidly conveys the implications of the verses.
The deluxe edition of this book, using marble white paper and with exquisite binding, speaks of the great care that the publishers, the Darul Umoor, Srirangapatnam, have taken in bringing it out.
For copies contact: Darul Umoor, Tipu Sultan Advanced Study and Research Centre, Srirangapatna, Mandya district, Karnataka 571438.
For info: Dr. B. Sheik Ali, Mysuru, Ph: 99021-38818.