A Modern Mosque without Minarets

The Vali-e-Asr mosque in Tehran doesn’t have a minaret, nor a dome; neither did the first mosque. A mosque is a place for worship, and the Qur’an doesn’t dictate a special structure for it. It’s what it contains that is important. 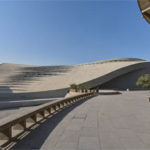 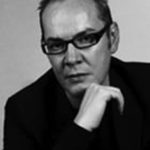 When the Tehran authorities commissioned the construction of a mosque near the City theatre “ one of Iranian capital’s most distinctive buildings “ it was always going to be a tricky balancing act for the architects to design something unique that did not eclipse the adjacent structure.
The theatre, which was built before the 1979 revolution, has a spectacular tiled circular structure with external pillars and is the largest exclusive space in Iran for performing arts. The new mosque next door is a modern building that sits in harmony with it, sweeping from the ground towards the Qibla (the direction of Mecca), allowing sunlight through windows embedded in a wave-like structure.
But the Vali-e-Asr mosque, designed by the Iranian architects Reza Daneshmir and Catherine Spiridonoff, is stirring controversy in a country that hosts some of the world’s most glittering places of worship. Iranian hardliners are refusing to recognise it as a mosque, complaining that it does not have a minaret or proper dome, and that it is dwarfed by the theatre.
The mosque was due to be officially inaugurated this summer, nearly 10 years after the couple’s Tehran-based architecture firm, Fluid Motion, was commissioned to design it. The building is almost finished, but controversy has led to its funding being cut, meaning that the interior design has not been completed. The mosque is located in “one of the most culturally sensitive places in Tehran”, according to its architects. It is at a point where the Enghelab (Revolution) Street crosses the tree-lined Vali-e-Asr, the most important junction in the city, not far from Tehran University and its surrounding bookshops.
“We tried to create an interaction between the mosque, which has a cultural essence, and the City theatre. We wanted to make it a cultural project that would be in harmony with its surroundings “ the mosque should respond to the needs of its own time,” the architects said.
Built over an area of 3,855 sq metres (4,600 sq yards), the seven-floor mosque is 32 metres high, only 20 metres of which is above ground. It has big prayer halls, cultural centres, an imam’s residence and parking spaces.
The mosque was proposed 14 years ago when Mahmoud Ahmadinejad was mayor of Tehran. When Mohammad Bagher Ghalibaf became mayor, the design was given to Fluid Motion. The couple are experts in designing contemporary buildings. Daneshmir’s 2008 Pardis Mellat cinema is in many ways responsible for starting a new wave of modern structures in Tehran.
“Our biggest source for this project was the Qur’an itself,” the architects said. “We tried to design this mosque with modesty, simplicity and good faith, and not a mosque which would get its pride from its structural height. The Vali-e-Asr mosque is located near the students’ park and the City theatre. We wanted it to connect better with the younger generations.”
The couple said they were inspired by the Quba mosque, the oldest in the world dating back to the lifetime of the prophet Muhammad. “Simplicity was a main feature of the first mosques,” they said. They thought about the one-room concept and designed it so that “the general outline of the mosque is a gentle dome”.
Creating novel religious spaces is not an unusual practice in the world of architecture, and unusual mosques even exist in Tehran, such as al-Ghadir mosque in Mirdamad Avenue, which won the Agha Khan award for architecture.
Whilst there are examples of humble religious spaces “¦ religious buildings are often created from grand atriums, domes and towers which stand high to dominate the visitors. These typologies metaphorically refer to the grand nature of God. The geometry of Vali-e-Asr mosque doesn’t follow this logic. It dissolves into its surrounding context. This makes the mosque an accessible and a humble religious space, most important purposes of the mosque which praying and gathering people in a public space have been fulfilled.”
Daneshmir and Spiridonoff said: “The Vali-e-Asr mosque doesn’t have a minaret, nor a dome; neither did the first mosque. A mosque is a place for worship, and the Qur’an doesn’t dictate a special structure for it. It’s what it contains that is important.”
(Source: theguardian.com/world/2017)