A Mushaira for Non-Muslims to Recite their Urdu Works 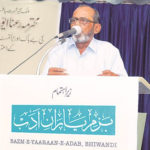 Residents of Bhiwandi have taken a step to celebrate India’s composite literary tradition, where Hindu writers have enriched the Urdu language. The “Bazm-E-Yaaraan-E-Adab” (gathering of lovers of literature), a social organisation floated by late Bhiwandi corporator Balkrishna Mukund Mali, is set to hold a mushaira, in which only non-Muslim Urdu writers will recite their compositions. “There is a growing perception these days that Urdu is a language of Muslims alone and is alien to India. The reality is that non-Muslims have played a big role in making Urdu literature what it is today. Munshi Chandarbhan Brahaman, who served in the court of Shah Jahan, was among the foremost Urdu writers. The first publisher who provided great service to Urdu was Munshi Nawal Kishore, who also came up with the first Persian-to-Urdu dictionary,” Abdul Jaleel Ansari, general secretary of the Bazm-E-Yaaraan-E-Adab, said. Ansari says the plan to hold a mushaira of only non-Muslim writers came in response to a social climate that negates the idea of Indians sharing a composite culture. “One of our close friends, Sandeep Gupte, posts an Urdu couplet on his social media account every day. In the comments that follow, it is mostly non-Muslims discussing the intricacies of Urdu. Their love for the language is very evident, and we felt the need to showcase to the world, the contribution of these people in enriching Urdu,” Ansari said. As part of the programme, the organisers have invited 16 non-Muslim Urdu poets from in and around Mumbai to read out their works.
The group has also sent out invites to non-Muslim guests to attend the function. “The function is open to all. However, we have deliberately sent out special invites to our non-Muslim friends. As it is our belief that sitting together and witnessing the beauty of a composite language and culture, created by the efforts of both Hindus and Muslims, will be our little step towards making the society a better place,” Ansari said. He pointed out that the Bazm-E-Yaaraan-E-Adab too was founded by a Hindu. “It was Mali’s idea to float this organisation. He understood the power of literature and arts in bringing people together. Till 1995 , when he passed away, Mali was the leading light in holding mushairas in Bhiwandi,” Ansari said.
Once known for being communally sensitive, Bhiwandi, a textile town located 50 km from Mumbai, houses 10 lakh power looms that process nearly a third of the cloth that the country wears. (Indian express)