Islamic Voice 0 March, 2016 12:00 am
Some Muslim Contributions to Modern Society
Dedication to Charity Work Rewarded with Trip to Space
Muslim Hero Who Saved Jews in Paris 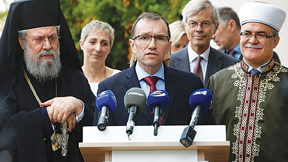 Cyprus: Christian and Muslim leaders in Cyprus recently repeated their full support for ongoing talks aimed at reunifying the ethnically-split country, saying their united stand for peace serves as a strong example of cooperation in a region where conflict is often fueled by religion.
Greek Orthodox Christian Archbishop Chrysostomos, Muslim Grand Mufti Talip Atalay, Maronite Christian Archibshop Youssef Soueif and representatives from the Latin Catholic and Armenian Christian churches say they are united in their support of the ongoing peace negotiations seen as the best chance at peace in decades. The leaders made the remarks after a meeting with U.N. envoy Espen Barth Eide, who praised them for their “strong leadership and strong will.” Cyprus was split into an internationally-recognized Greek Cypriot south and a breakaway Turkish Cypriot north in 1974. Archbishop Soueif said the leaders also touched on improving access to all places of worship across the island to bolster a sense among Cypriots that reconciliation has deeply taken root.
(Extracted from http://abcnews.go.com)