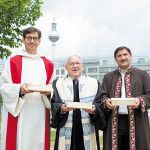 Berlin: A unique place of worship is coming up in Berlin, Germany, according to a report by Jannis Hagmann in the German webmagazine Qantara. Called the “House of One”, it is intended to be a common prayer space for Jews, Muslims and Christians, symbolizing peaceful coexistence between these communities. Three men who are working hard to make this dream come true are pastor Gregor Hohberg, imam Kadir Sanci, and rabbi Andreas Nachama. It is hoped that the church, mosque and synagogue together under one roof will be completed in five years’ time.
Building work will begin once 10 million euros have been collected. So far, over a million euros have been donated. Over 1,400 individuals have already contributed, as the “The House of One” association website reveals.
At the “House of One”, all religions carry the same weight. “The concept of equality is key,” explains Sanci. There will only be one shared entrance, and church, synagogue and mosque can only be reached via a shared common room. From this room, three doors will lead to the individual houses of worship. The common room represents the shared origins of Judaism, Christianity and Islam. At the same time, it acknowledges that each religion has its own space. n
(en.qantara.de/content/the-berlin-project-house-of-one-three-religions-under-one-roof)