Attacks on interfaith harmony, mutual respect and trust are the “world’s single most important threat,” King Abdullah of Jordan warned. Speaking recently at the International Conference on Cohesive Societies (ICCS) in Singapore, he condemned both “outlaws of Islam and extremist Islamophobes.” “Perpetuators of hate-filled messages are distorting our religion’s great heritage and teachings,” he said. He called on the global community to tackle this challenge by “resisting hatred and exclusion,” supporting economic growth and protecting the environment.
In a keynote speech, the Jordanian ruler urged 700 delegates from 40 countries to apply the golden rule. “Loving one’s neighbor is not just an ideal. It is the golden rule that enables all of us to live side by side, to look beyond ourselves, and to achieve what we can only achieve in common.”
The conference was organized by the S. Rajaratnam School of International Studies (RSIS) with the support of Singapore’s Ministry of Culture, Community and Youth. Ong Keng Yong, executive deputy chairman of RSIS, described the Singapore conference as a platform for constructive dialogue to strengthen mutual trust and understanding across communities. “Singapore is a multiracial, multi-religious society, and we work hard to keep our country peaceful and secure. At the same time, we are part of the global community, which faces challenges posed by increased connectivity, intensifying identity politics, and infinite technological development,” he said.
King Abdullah listed Jordanian efforts including the Amman Message, the Common Word Initiative, and UN World Interfaith Week. When it comes to hate speech on the internet, solutions are not exclusively the responsibility of governments and big companies, he said. “In a very real way, the internet belongs to its users. Moderate, positive voices need to reclaim this space and redirect the dialogue away from misinformation, insults and fear, and toward understanding and respect. Young men and women have a vital role in speaking up on social media and social networking sites, and using their talent for innovation to promote mutual understanding and hope.”
The Jordanian monarch also called for a “holistic approach to address security and the issues that extremists exploit.” “We must also help to resolve conflicts, especially the core crisis of my region, the long denial of Palestinian statehood. The Palestinian-Israeli conflict has fueled global discord and radicalism. We all need a lasting peace, meeting the needs of both sides, with a viable, independent, sovereign Palestinian state, on 1967 lines, with East Jerusalem as its capital, but living side by side with Israel, in peace and security.
“We must safeguard Jerusalem, a holy city to billions of people around the world. As Hashemite Custodian of Jerusalem’s Islamic and Christian holy sites, I am bound by a special duty. But for all of us, Jerusalem must be a unifying city of peace.” 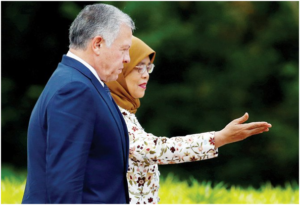