Islamic Voice 0 February, 2016 12:00 am
Philippine Christians observe Israel-Palestine Peace Week
Singapore President said to be among 50 most influential Muslims around the world
Working for Peace in Central Africa 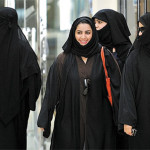 Makkah: Three women won the municipal council seats in Makkah region, according to the Saudi Electoral Commission.
One of the women winners, Salma bint Hizab Al-Oteibi was elected to the council of Madrakah, a village north of Makkah. Two women also won in Jeddah, Dr. Luma Al Sulaiman and Rasha Hifdhim. Over 6,440 candidates, including more than 900 women, participated in the landmark election, the third ever in the Kingdom. In the Municipal elections held in Saudi Arabia, women participated as voters and candidates for the first time. A total of 978 women had registered as candidates, alongside 5,938 men. About 130,000 women had registered to vote. That figure still falls well short of male voter registration, which stands at 1.35 million.