Working for Peace in Central Africa 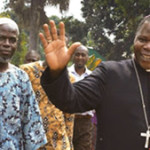 For some years now, a deadly conflict has been raging in the Central African Republic (CAR). The conflict in what is one of the world’s poorest countries is often described as being between Muslims and Christians. A large number of Muslims have been killed in the CAR, and thousands more forced to flee the country by armed militiamen who say they want revenge for atrocities committed against Christians by mainly Muslim rebels who briefly seized power in 2013. Two religious leaders from the country, an archbishop and an imam, are working together to end the bloodshed that has displaced about 20% of the CAR’s population. Braving immense challenges, they are travelling around this violence-torn country, seeking to bring about peace and reconciliation between their peoples. The two men, Imam Oumar Kobine Layama, senior-most Muslim cleric in Bangui, the capital of the CAR, and Archbishop Dieudonne Nzapalainga, head of the Catholic Church in the country, insist that it isn’t about religion as such but, rather, about politics. And one proof of that, they say, is their own friendship. Their friendship began when the imam the sought refuge at the archbishop’s residence after receiving death threats from the anti-Muslim militia. Later his house, like the houses of many other Muslims, was burned and looted. Soon, the archbishop and the imam became constant companions, travelling to Western capitals together to draw attention to a conflict they believe has been largely ignored by the outside world.