Hindu Man in Dharavi Reaches out to Muslim Friends 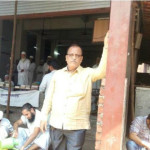 In the wake of the recent Dadri incident, in which a mob of people killed a Muslim man after rumours of him storing cow meat surfaced, a Hindu man in Dharavi has succeeded in setting a good example. As a mosque in Bandra’s Dharavi area is getting renovated, a Hindu shopkeeper has temporarily given the space inside his store to Muslim devotees to perform their daily prayers. “Five months ago, they asked me if they could pay me rent and use the space inside my shop to offer prayers. I refused the proposal and asked them to use the space free of cost, instead,” recalled Deepak Namdeo Kale, the Hindu shop owner.

April 1, 2020
Parman Romonov and Kaim Abdijew were Soviet prisoners of war captured by the Nazis. Their dates of birth and death are r... More
Prev Post 6/11 Victim’s Mother on a Mission to Build Trust
Next Post BMMA Against Uniform Civil Code: ‘Does Not Guarantee Freedom of Religion’

A Tenner and a Two-Rupee