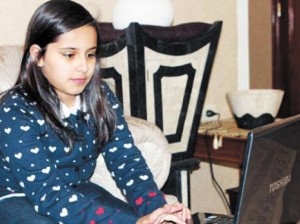 By Abdulkarim Al-Dhiyabi
Taif: In an unprecedented step, a 11-year-old Saudi girl launched a YouTube English language series, apart from lessons in Arabic language, self-development, mathematics and the art of drawing and photography. Majd Al-Asiri’s YouTube page, which was launched recently from Taif, has been watched by 14,000 people from 39 countries.
Okaz/Saudi Gazette visited Majd at her family home recently to learn about her future plans for her educational videos. Majd’s father, Muhammad Abdullah Asiri, said his daughter has converted their home to a workshop to give lessons.
“She provides her lessons free of charge. Men, women and children of different ages benefit from her lessons on Alpha 71 Academy. Majd said she strives to boost the culture of knowledge, work and cooperation in the family and with others. She selects useful information, develops, and then presents it for people to benefit from. Majd chose the number 71 because the number 7 indicates her seven sisters and the 1 is a symbol of her only brother, Abdullah, who is only 7.
Majd’s sisters have played a key role in the success of the YouTube page. She has assigned her eldest sister Reem, 26, who is doing her master’s in the US, to manage the page. Maha, 24, who is doing her master’s in computer science, has been assigned the task of technical management of the page while Shahd, 21, who is a student in pharmacology, gives drawing lessons. Ahd, 20, is a self-development trainer. Raghad, 16, who specializes in graphic design, has been assigned the task of editing her videos.
She stressed that she has not forgotten Abdullah. She has assigned him the task of training his peers in speaking English from home and the basics of drawing and swimming.
Meanwhile, President of Taibah University, Dr. Adnan Al-Mazrou, said the initiative is courageous and creative in a family whose members have strong bonds.
“The family is carrying out a clear message, which is new to our society. The family has several objectives, most prominent of which is to disseminate the culture of working from home.”
(www.saudigazette.com)