Islamic Voice 0 March, 2015 12:00 am
Should this be the Model for India? – Health Bills are Killing Americans
Historical Moscow Cathedral Mosque to Re-open
Umrah in Ramadan 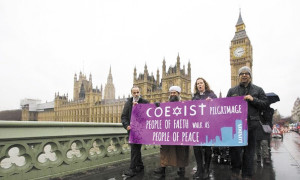 London: Christians, Jews and Muslims from all walks of British life made a pilgrimage through central London last fortnight, in a show of unity against the hatred that drove recent attacks in France and Denmark. More than 100 people, including faith leaders, children and pensioners, walked in the rain from London’s main mosque at Regent’s Park to the Central Synagogue and then through the bustling crowds of Soho to Westminster Abbey. At each venue they gathered for a moment of reflection, led variously by the local imam, rabbi and priest, to emphasise their shared values and hopes for peace. “The terrorists hope to divide us but these atrocities are uniting us,” Sheikh Khalifa Ezzat, chief imam at London Central Mosque, said.