Globally 30 to 50 per cent of total food produced around the world is wasted. 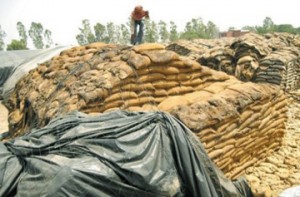 It is estimated that 12.2 billion tons of the total food produced on the Planet Earth, i.e., 30 to 50 per cent, is wasted before reaching the human stomach. It is revealed in a report titled Global Food: Waste Not, Want Not compiled by Dr. Tim Fox and Dr. Ceng Fimeche of Institution of Mechanical Engineer or IMechE, a global NGO. The world population will be reaching 9.5 billion by 2050 and if all these mouths have to be fed, sustainable practices will have to be promoted to save the food. Today the world produces four billion metric tons of food annually.
Overall between 30% and 50% of what has been bought in developed countries is thrown away by the purchaser. For example, up to 30% of the UK’s vegetable crop is never harvested as a result of such practices.

21 million tons in India
In India 21 million tons of wheat is wasted each year due to inadequate storage and distribution systems. In neighbouring Pakistan, losses amount to about 16% of production, or 3.2 million tons annually.
In China, a country experiencing rapid development, the figure is about 45% whereas in less-developed Vietnam, rice losses between the field and the table can amount to 80% of production.
Overall the wastage rates in fruits and vegetables are considerably higher than for grains. In the UK, a recently published study has shown that 46% of potatoes grown is not delivered to the retail market. (6% lost in the field +12% discarded on initial sorting+5% lost in store+1% lost in post-storage inspection+22% lost due to rejection after washing). A similar survey in India showed that at least 40% of all its fruit and vegetables is lost between grower and consumer due to lack of refrigerated transport, poor roads, inclement weather and corruption. Controlling and reducing the level of wastage is frequently beyond the capability of the individual farmer, distributor or consumer, since it depends on market philosophies, security of power supply, quality of roads and the presence or absence of transport hubs.
As nations become more affluent in the coming decades through development, per capita calorie intake from meat consumption is set to rise 40% by mid-century. These products require significantly more resource to produce. As a global society therefore, tackling food waste will help contribute towards addressing a number of key resource issues.
Over the last five decades, the farm lands have increased by 12% globally. However, with global food production already utilizing about 4.9 Giga hectares (Gha) of the 10Gha usable land surface available, a further increase in farming area without impacting unfavourably on what remains of the world’s natural ecosystems appears unlikely. The challenge is that an increase in animal-based production will require greater land and resource requirement, as livestock farming demands extensive land use. One hectare of land can, for example, produce rice or potatoes for 19″22 people per annum. The same area will produce enough lamb or beef for only one or two people. Considerable tensions are likely to emerge, as the need for food competes with demands for ecosystem preservation and biomass production as a renewable energy source.

Water Usage
Over the past century, fresh water abstraction for human use has increased at more than double the rate of population growth. Currently, about 3.8 trillion cubic metre of water is used by humans per annum. About 70% of this is consumed by the global agriculture sector, and the level of use will continue to rise over the coming decades. Indeed, depending on how food is produced and the validity of forecasts for demographic trends, the demand for water in food production could reach 10″13 trillion cubic metre annually by mid-century. This is 2.5 to 3.5 times greater than the total human use of fresh water today. Agriculture currently consumes approximately 1% of total global energy consumption.
In the case of water for example, about 550 billion cubic metre of water is wasted globally in growing crops that never reach the consumer
Cosmetic reasons and
Cautious labels
Of the quantity that does reach the supermarket shelves, 30″50% is thrown away by the final purchaser in the home often at the direction of conservative ‘use by’ labelling. Labelling of many foods can actually encourage waste. Many consumers have a poor understanding of ‘best before’ and ‘use by’ dates, and these dates are generally quite conservative, as they are driven by the retailer’s desire to avoid legal action. Promotional offers and high-pressure advertising campaigns, including bulk discounts and ‘buy one get one free’ offers, encourage shoppers tobuy large quantities in excess of their actual needs, which leads to substantial food wastage in the home. In the UK, for example, about seven million tons (worth about £10.2 billion) of food is thrown away from homes every year.
(Source: This is a summary of the report by global NGO, Institution of Mechanical Engineers and could be downloaded by clicking: MechE+Global+Food+Report-1.pdf-Adobe Reader)