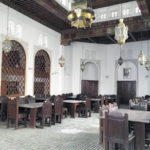 This April 14, 2016, photo shows the reading room of the Al-Qarawiyyin mosque in Fez, Morocco

Fez: (Morocco): Founded 12 centuries ago by a woman and nestled in the old quarter of Fez, Morocco’s University of Al-Qarawiyyin library is one of the world’s oldest libraries, home to unique Islamic manuscripts treasured by historians. Yet it’s been largely hidden from the public. The architect leading its restoration, Fez native, Aziza Chaouni, did not even know it existed until she was asked to work on it. Chaouni is hoping it will mark an ideological change, too. Until now, the privilege of using the library has been limited to scholars who seek formal permission, and authorities have not decided yet whether to change that. From calligraphic designs on the walls to ceramic patterns on the floors and wooden carvings on the ceilings, the fingerprint of almost every ruling dynasty since the 9th century can be seen in the architecture. A devout and wealthy Muslim woman from the Tunisian town of Kairaouan, Fatima al-Fihri, provided the endowment for building al-Qarawiyyin in the 9th century. Originally a mosque, it expanded in the 10th century to become a university. The library houses a collection of manuscripts written by renowned thinkers from the region, including Ibn Khaldun’s “Muqadimmah.” Other texts include a 9th-century copy of the Quran written in Kufic calligraphy, and a manuscript on the Maliki school of Islamic jurisprudence by Ibn Rashd, also known as Averroes. The manuscripts are now kept in a secure room, with strict temperature and humidity control.