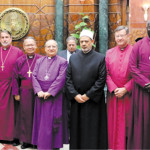 Cairo: Alliances were formed for peace between Muslims and Christians in Sudan, South Sudan and Malaysia. The Primate of Jerusalem and the Middle East, Archbishop Mouneer Anis, organised meetings between Anglican leaders and the Grand Iman of Al-Azhar and the Coptic Pope. The Archbishop of Sudan, the Most Revd Daniel Deng, thanked the Grand Imam, Dr Ahmed el-Tayyeb, for making statements that “have brought moderation into Sudanese society and saved lives.” The leaders encouraged the Dr el-Tayyeb to “play a role in combatting false Islamic teachings that is propagated by extremists, especially in Africa.” In response, the Grand Imam said that Al-Azhar is committed to correcting such false teachings which often lead to terrorism and violence.
The Grand Imam expressed his appreciation for the “brotherly relations with the Anglican Church in Egypt” and stressed the importance of the partnership and collegiality between religious leaders for the common good of humanity.
“It is important that we work together to overcome the challenges that are facing the world,” Dr el-Tayyeb said.
(Extracted from http://www.anglicannews.org/news/2015)