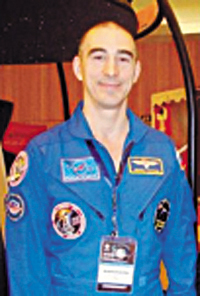 : Three Russian astronauts who came to visit the Prince Salman Science Oasis (PSSO) told Saudi students that while taking a picture of some beautiful cities from outer space, the brightest and beautiful cities they saw were Makkah and Madinah, specifically the spots in the centers of the two holy cities. These astronauts came as part of the Association of Space Explorers (ASE) program during their 25th Assembly in Riyadh last fortnight. “When we are in outer space, we take photos during the day for good visibility and shot, but at night it is difficult to take pictures because you have to use a special technique. In spite of this, I managed to take many pictures of various cities at night. I was amazed to find that the cities of Makkah and Madinah outshone other cities around the world,” observed astronaut Anatoly Ivanishin during an interaction with the students. The four Russian astronauts who visited the Oasis are Andrey Borisenko, Alexander Samokutyaev, Anton Shkaplerov and their interpreter Boris Meshcherykov. PSSO is a non-profit organization for developing an interactive science center and is affiliated to the Riyadh Philanthropic Society for Science.