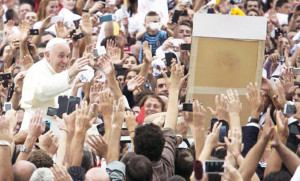 Tirana: Pope Francis has said that Albania’s inter-religious harmony was an “inspiring example” for the world, showing that Christian-Muslim coexistence was not only possible, but beneficial for a country’s development.
“The climate of respect and mutual trust between Catholics, Orthodox and Muslims is a precious gift to the country,” Francis said in his opening speech on his arrival in the Balkan nation, where Christians and Muslims endured brutal religious oppression under communism, but today live and work together peacefully. “This is especially the case in these times in which authentic religious spirit is being perverted by extremist groups, and where religious differences are being distorted and instrumentalized,” he told an audience that included Albanian President Bujar Nishani and the diplomatic corps.
It was Francis’ first visit to a majority Muslim nation since the Islamic State crackdown on Christians in Iraq, where members of religious minorities are being killed, persecuted or forced to flee their homes. The Vatican has voiced mounting concern about the exodus of faithful from lands where Christian communities have existed for 2,000 years. “Let no one consider themselves to be the ‘armor’ of God while planning and carrying out acts of violence and oppression!” Francis said in the wood-paneled reception room of Tirana’s presidential palace.
Muslims make up about 59 percent of Albania’s population, with Catholics amounting to 10 percent and Orthodox Christians just under that, according to the country’s official figures. Francis’ decision to visit tiny Albania before any major European capital is in keeping with his desire for the Catholic Church to go to the “periphery.”