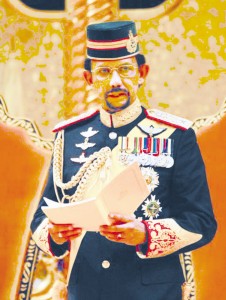 Bandar Seri Begawan::.Brunei’s Sultan Hassanal Bolkiah has announced that a new Shariah criminal law that could include penalties like amputation for theft and stoning for adultery will be enforced in six months.The sultan said in a speech that the Shariah Penal Code would be applied to Muslims only. “By the grace of Allah, with the coming into effect of this legislation, our duty to Allah is therefore being fulfilled,” he said at a legal conference in Brunei’s capital. Brunei’s Shariah Islamic court had previously handled mainly family-related disputes. But the new Shariah Penal Code was being reviewed for many years. Nearly 70 percent of Brunei’s people are Muslim Malays, while about 15 percent are non-Muslim ethnic Chinese. Brunei already has a dual system combining civil courts based on British law as the sultanate was a British protectorate until 1984 , and Shariah-compliant courts handling marital, inheritance, and other low-key issues. In his speech, the sultan appeared to try to assuage any international concerns, saying the Sharia change “does not in any way change our policies … as a member of the family of nations.”