llegals can Leave with No Penalty 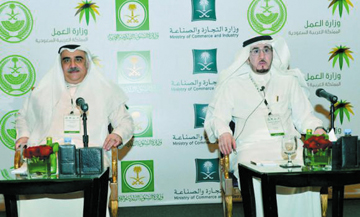 Expats without legal documents who have been stuck in Saudi Arabia for years, have a golden chance to end their ordeal by benefiting from the amnesty announced last month. Labor Minister Adel Fakeih announced the plan to clean up the labor market. According to it, undocumented foreign workers can leave Saudi Arabia on exit-only visas without being penalized. Fakeih said this while opening a forum of Saudization committees at regional governorates. He said the forum was aimed at tackling the issue of excess foreign workers and violators of iqama and labor regulations. He defended the SR 2,400 levy, saying it was imposed to protect the nation’s interest. Indian Consul General, Faiz Ahmad Kidwai welcomed the move by the Labor Ministry, and hoped illegal workers would make use of the offer. “There are several Indian workers who face iqama-related problems,” Kidwai said. “Many of them find it difficult to renew their iqamas. Some of them could not even find their sponsors.” According to one report, there are about 50,000 Indian workers who have allegedly run away from their sponsors.