Campaign to Respect the Name ‘Muhammad’ 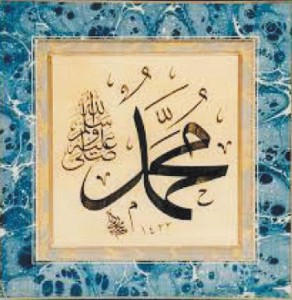 Jeddah: A group of students at King Abdul Aziz University have launched a campaign through word of mouth and social media that aims to restore the reverence and the special standing associated with the beautiful name Muhammad, the name of the Prophet (Pbuh).
The campaign has a dual purpose; first to remind Muslims of the profound meaning of this name and to show its importance, distinction, and the special place it should occupy in our hearts. Second, these young students want to put a stop to the all too common and impolite habit of calling out to anyone whose name is unknown to us, “Hey! Muhammad!” “We hear the Prophet’s name rudely and loudly called out wherever we ago, to the extent that we have stripped this name of its significance. Customers at a restaurant yell to the waiter, ‘Hey, Muhammad!’ Shoppers in the stores ask a random employee, ‘Muhammad, how much is this for?’ The waiter, the barber, the person working in the mini-market or dry-cleaning store, they all have names that their parents chose for them. Why automatically label them with the name Muhammad?” demanded one student who is frustrated with this habit which has become widespread in Saudi society. Out of courtesy to the person you are communicating with, you can take the time to ask his name. Unfortunately, overusing the name Muhammad has become a form of disrespect and is even viewed as an insult by some expatriate workers because we have failed to acknowledge their simple right to be called by their real names. Prophet Muhammad taught us to summon someone else by pronouncing the name or nickname most beloved to that person. In fact, recent studies have shown that if we are considerate and mindful enough to call a person by the first name, he/she will instantly be more flexible and will want to help and serve us better. The campaign suggests that if you do not wish to inquire about the name of the man who bags your groceries for you at the neighborhood supermarket or who fills up your car’s tank at the gas station, you can smile warmly and call him ‘Brother’ or ‘Sir’ rather than absentmindedly refer to him as Muhammad. It seems that we have forgotten the rich meaning of the name Muhammad and we are using it as any regular name, without giving the name the weight it deserves. The first person in all of Arabia to be given the name Muhammad was the Prophet. In his time, Muhammad was not a common name and it means praiseworthy or praised. The university students are picking up popularity with this campaign and if you want to be on board, you can spread the message too. Respect people’s names and more importantly, respect the Prophet’s name!