Workshop for Teachers to Embrace Moderation

Islamic Voice 0 December, 2016 12:00 am
MATRIMOWANTED GROOM
Afghanistan will never forget India’s Cooperation
Guardian Approval a must for Saudi Women to Drive in Kuwait 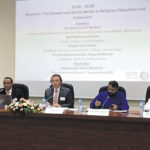 Rabat: A workshop on countering extremism and violence, held under the theme of “The Role of Religious Education in Promoting Peace and Fighting Violence”, called for enabling teachers and those working in religious schools to embrace openness, to humanitarian studies and moderation in religious sciences. It also stressed on the need to distance religious schools from extremism and violence discourse. The two-day event was held here on November 1-2. It was organized by the Organization of Islamic Cooperation (OIC), the Global Counter-Terrorism Forum (GCTF), and the Islamic Educational, Scientific and Cultural Organization (ISESCO) in cooperation with the Moroccan Ministry of Endowments and Islamic Affairs. The workshop also stressed the necessity to integrate between religious sciences and humanities to reach a state of balanced openness, in addition to opening up to modern and advanced means and tools of education that focus on the moderation of religion with all its various dimensions. Head of the Peace, Security and Conflicts Resolution Unit at the OIC, Askar Mussinov said that the Organization has a principled position against terrorism. The OIC also announced the launch of a website for the Center for Dialogue, Peace, and Understanding, which aims at debunking extremist narratives.