Islamic Voice 0 January, 2018 12:00 am
We are Overusing Earth’s Resources
An Industrial City for Women in Jeddah
Church of Kokheh – Iraq’s Christians and Muslims agree to revive site of ancient church

3.4% of world’s people live outside the country of their birth; Since 2000, world’s migrant population has increased by 85 million people; 17 million Indians live outside India today. 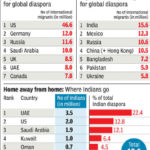 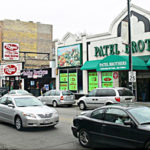 Devon Avenue in Chicago, US, known for businesses of Indian migrants.

When a person lives outside the country of his birth, he is called an ‘international migrant’. There are now 258 million who are migrants, or living in a country other than where they were born. Today, 3.4% of the world’s people fall in the category of International Migrants.
People leave their country of birth for education, employment, new opportunities for self-growth, due to marriage, or simply for quality of life. But there are equal number of negative reasons which compel people to leave their country of origin. These may be conflicts, poverty, inequality and absence of opportunity for sustainable livelihood.
Though migration can make people vulnerable to discrimination and insecurity, generally it has helped people to better their living standards. It has also come as a boon for poor and developing countries. In 2016, the migrants sent home US $413 billion as remittances.
United Nation’s Department of Economic and Social Affairs (UN-DESA) compiles data on migration and publishes the International Migration Report twice every year. It is basic source for countries to access data and work out policies to ensure equity and raise an inclusive society. Here are some highlights from the latest report which was released o December 17, 2017:
India is now the country with the largest number of people living outside the country’s borders (“diaspora”), followed by Mexico, the Russian Federation and China. In 2017, 16.6 million persons from India were living in another country compared to 13.0 million for Mexico. Other countries with significant “diaspora” populations are the Russian Federation (10.6 million), China (10.0 million), Bangladesh (7.5 million), Syrian Arab Republic (6.9 million), Pakistan (6.0 million) and Ukraine (5.9 million).

Parvasiya Divas
India has designated January 9 as the Parvasiya Divas to celebrate the contribution of NRIs to the progress of India. This is the day Mahatma Gandhi had returned from South Africa in 1915.
Destinations
Of the 20 largest countries or areas of origin of international migrants, eleven were located in Asia, six in Europe, and one each in Africa, Latin America and the Caribbean, and Northern America.
Globally, the 20 largest countries or areas of origin account for almost half (49%) of all international migrants, while one-third (34%) of all international migrants originate in only ten countries.
The 258 million population of international migrants represents 49% increase since 2000. Eighty five million of these were added in last 17 years. The number of migrants as a fraction of the population residing in high-income countries rose from 9.6% in 2000 to 14% in 2017.
On September 19, 2016, the General Assembly adopted the New York Declaration for Refugees and Migrants, in which UN Member States agreed to implement well-managed migration policies. They also committed to sharing more equitably the burden and responsibility for hosting and supporting the world’s refugees, protecting the human rights of all migrants, and countering xenophobia and intolerance directed towards migrants. An international conference on migration will be convened in late 2018 for the purpose of adopting a Global Compact for Safe, Orderly and Regular Migration.
Migration contributes to growth of population. Between 2000 and 2015, migration contributed 42% of the population growth in Northern America and 31% in Oceania (Australia, New Zealand, Fiji and other small nations in the region). In Europe, the size of the total population would have declined during the period 2000-2015 in the absence of migration.
Since more people of working age (20″64 years) are migrants, they enable the countries receiving them to have a better proportion of people who can contribute to economic growth and bring down the proportion of dependant people (i.e., children and aged people).
In 2017, around three quarters (74%) of all international migrants were of working age, or between 20 and 64 years of age, compared to 57% of the global population.
In 2017, high-income countries hosted 64%, or nearly 165 million, of the total number of international migrants worldwide.
The number of international migrants includes 26 million refugees or asylum seekers, or about 10% of the total.  Although a majority of the world’s international migrants live in high-income countries, low- and middle-income countries host nearly 22 million, or 84%, of all refugees and asylum seekers.
Destination and origin of international migrants
More than six of every ten international migrants reside in Asia or Europe (80 and 78 million, respectively). Northern America hosts the third largest number (58 million), followed by Africa (25 million), Latin America and the Caribbean (9.5 million) and Oceania (8.4 million).
(For fuller version of World Migration Report 2017 log onto:
https://www.un.org/development/desa/publications/international-migration-report-2017.html)