The Earth’s environment is facing a bleak future with market driven economy depleting natural resources at a rate the nature will not be able to replenish. 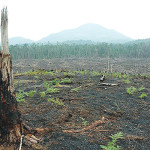 If we take the number of productive acres and divide this by current population of the world, each person gets a footprint of 4.5 acres. At the present time, however, the average American footprint is estimated to be 23.5 acres, which is more than five times the world’s average. If everyone in the world had a footprint as large as that of the USA, we would need more than five more planets to support the population of our world. The average footprint for a person in India is 2 acres and in Bangladesh it is one acre.
Ninety five per cent of the products that we use today contain toxins. In fact we don’t know what is natural, the natural itself is becoming unnatural.
The United Nations Environment Program says: one in four mammalian species, one in eight bird species, one in three amphibian species, and 70% of all the world’s plant species are now endangered. Global warming, along with deforestation, agriculture and urbanization, could drive half of all species on earth to extinction by 2100, according to eminent biologists such as Edward Wilson of Harvard University.
Ninety per cent of all large fish species have been driven towards extermination. Depleted water tables are becoming a global problem and since 1950 the world has lost about 30% of its arable land and soil fertility.
Depleted water table are becoming a global problem and since 1950 the world has lost about 30% of the its arable land and soil fertility.
The fact that 30% of Amazon rainforest (the ‘lungs of the earth’) have been cut down in recent decades need to be connected with our need for more soybeans to feed the cattle and pigs who provide our beef and pork.
According to the Center for Public Integrity, in the last year more than 770 corporations and interest groups have hired an estimated 2,340 lobbyists to influence federal policy on climate change. That number is more than three times of what it was only five years ago and means that Washington now has more than four climate lobbyists for every member of Congress. The Center also estimates that lobbying expenditures on climate change topped $90 million last year, a figure that will no doubt be much higher this year.
(Source: Extracted from the book titled Religion, Culture and the Ecological Crisis, edited by Siddhartha. This issue carries a review of the book.)