Islamic Voice 0 February, 2016 12:00 am
Baloney of Love Jihad
Brigadier General Nagwa El-Haggar is one of the three female Muslim police officers who died in the attacks.
“Iranian Women, Most Emancipated”: Molaverdi 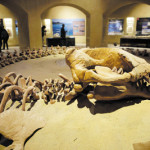 The largest intact Basulosaurus isis whale fossil, which is on display at the Wati El Hitan Fossils and Climate Change Museum, on the opening day, in the Fayoum oasis, Egypt, Thursday, Jan. 14, 2016. Egypt has cut the ribbon on the Middle Easts first fossil museum housing the world’s largest intact skeleton of a “walking whale” in an attempt to attract much-needed tourists driven off by recent militant attacks. (AP Photo/Thomas Hartwell)

Cairo: Egypt unveiled Middle East’s first museum dedicated to fossils that showcases an early form of whales, now extinct and known as the “walking whale”, Associated Press reported.
Egypt took significant security measures in the new museum, which is located in the desert at the Valley of Whales, about 170 kilometers (105 miles) southwest of the capital, Cairo.
The construction of the Fossils and Climate Change Museum was covered by a 2 billion euros ($2.17 billion) grant from Italy, according to Italian Ambassador Maurizio Massari.
Its centerpiece is an intact, 37-million-year-old and 20-meter-long skeleton of a legged form of whale that testifies to how modern-day whales evolved from land mammals.
“When you build something somewhere so beautiful and unique, it has to blend in with its surrounding “¦ or it would be a crime against nature”, the museum’s architect Gabriel Mikhail said, pointing to the surrounding sand dunes. The Valley of Whales museum is also home to prehistoric tools used by early humans and various whale fossils exhibited in glass boxes corroborating the evolutionary transition of the early whales from land to water creatures.