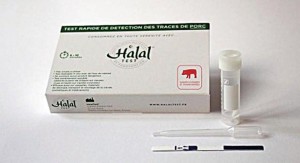 Paris: A French company has developed a new kit which went on sale in the country to detect the presence of pork or alcohol in various produce. The ‘Halal Test’ is aimed at the Muslim market and claims rapidly to detect the presence of pork in any meal. Priced at ¬6,90 each or ¬125 for a packet of 25, a device, simply called “Halal Test, the device consists of a strip which the consumer must put into a glass of warm water containing a sample of food. After a few minutes, the test will then show one of two options: either a single bar for a negative test or two bars for a positive one, which means there is alcohol or pork present. “The appearance of two red lines means that we have pork present,” says Abderrahmane Chaoui, one of the product’s creators. The product is the brainchild of Chaoui, 25, and his classmate, 27-year-old Jean-FranÃ§ois Julien. The ‘Halal test’ can be used not only with meals but also with beverages, cosmetics and pharmaceuticals. Eventually, the company, despite being in its germinating stages hopes to modify the test so that it is possible to recognize whether the animal from which the meat was obtained was slaughtered according to Islamic ritual, “based on blood oxygenation.” This means that the test would truly become a test to see whether all meat was halal, rather than just directly outlawed. Additionally, at the beginning of 2011, sausages labeled as Halal by company Knacki Herta had to be withdrawn from supermarkets after tests demonstrated the presence of pork. Food falsely labeled as Halal has been at the centre of some scandals in France in recent years. France’s Muslim population reached an estimated 6.5 million in 2013 and there is likely a big market for such a product, especially in the wake of Europe’s horsemeat scandals.