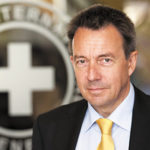 The International Committee of the Red Cross (ICRC) has called on Western and regional countries to use their influence towards ending the Saudi war on Yemen.”Definitely we would hope that Western countries understand the deep crisis, the risk of this enormous crisis for international stability, for the stability of the region,” said ICRC President Peter Maurer during a visit to the Yemeni capital Sana’a. He noted that the war on Yemen has exacerbated a huge cholera epidemic, which has already claimed the lives of hundreds of people. Saudi Arabia has been leading the campaign against Yemen to reinstate the former government and crush the Houthi Movement. The campaign has seriously damaged the country’s infrastructure. Local Yemeni sources have put the death toll from the Saudi war at over 12,000, including many women and children. Maurer went on to stress that the country’s health system is in shambles, salaries have not been paid for at least 10 months, rubbish is “piling up” in the streets, and hospitals, water stations and other vital infrastructure have been attacked and destroyed by the Saudis. He noted that about 400,000 people have been infected by cholera.