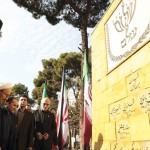 Tehran: Authorities in Tehran unveiled a monument to slain Iranian Jewish soldiers who died during the country’s long and bitter war with Iraq between 1980 and 1988. Photos of the ceremony published by Iran’s IRNA news agency showed Iranian officials and members of the Jewish community praying together and placing wreaths on the graves of the soldiers, who were hailed as “martyrs.” A public ceremony marked the memorial’s opening on December 15, with speeches that took place at a dais flanked by the Iranian flag and a menorah. Banners showed the images of fallen soldiers, hailed as “martyrs” in Farsi and Hebrew inscriptions, Washington Post reported. Iran has the Middle East’s second-largest population of Jews, with around 25,000 living there today, mostly in Tehran, Isfahan, and the southern city of Shiraz. Before a mass exodus following the 1979 Islamic Revolution, Jews numbered over 100,000 in the country. There are dozens of active synagogues across Iran that attract large gatherings and Jews, like some other minorities, are guaranteed a fixed number of seats in parliament. Scott Lucas, an Iran specialist at Birmingham University in Britain and editor of the EA World View website, says the monument allows the Iranian government to uphold its claims that it accepts the country’s religious and ethnic minorities.
(www.ummid.com)