On 16 May 2019, a group of Buddhists in Myanmar’s capital, Yangon, launched a ‘White Rose’ campaign which offers roses to Muslims who are fasting during Ramadan. The campaign was organized to show solidarity with Muslims after Buddhist mobs gathered around a number of temporary Muslim prayer houses and demanded that prayer services be suspended. On the evenings of 14 and 15 May, mobs of more than 100 Buddhist extremists attempted to prevent Muslim prayers, demanding that three prayer houses set up for Ramadan observance in the South Dagon area of Yangon be closed down. In response, Buddhist monk Bandatta Seidatta, more famously known as Asia Light Sayardaw, created the White Rose campaign. Bandatta Seidatta visited the South Dagon Muslim community on the evening of 16 May to offer them white roses as a way of providing encouragement and support. 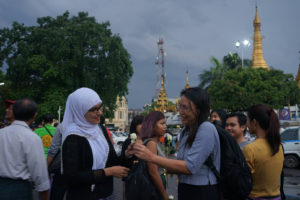