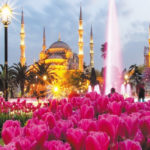 Ottawa: The Istanbul Metropolitan Municipality (İBB) was presented with an award and certificate by the authorities of the World Tulip Summit, which was held in Ottawa, in the first week of October. Presented by the head of the World Tulip Summit Michel Gauthier, the certificate was accepted by Turkish Ambassador to Canada Selçuk Ünal in the name of Istanbul Mayor Mevlüt Uysal, İBB stated. Addressing the participants, World Tulip Summit Head Michel Gauthier stressed the importance of the “tulip” flower in Turkish culture, and praised the studies of İBB on tulips. Stating that the tulip has an essential place in Istanbul’s Cityscape, Gauthier expressed his gratitude over the “International World Peace Park” in Istanbul’s Zeytinburnu district, which was garnished with many original tulips and flower species. Under the context of the festival, İBB was also granted the award of “5 Best Spectacular Tulips.”