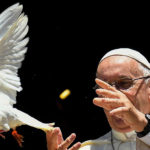 The head of the Catholic Church, Pope Francis, recently led a summit of religious leaders demanding peace in the Middle East, condemning a “murderous indifference” he said, is fanning violence and sparking an exodus of Christians. The Pope convened the summit in the southern Italian city of Bari. He spoke of “dark clouds of war, violence and destruction, instances of occupation and varieties of fundamentalism, forced migration and neglect”. He said: “All this has taken place amid the complicit silence of many.” For the Middle East today is weeping, suffering and silent as others trample upon those lands in search of power or riches,” he said. Prayers for peace in the Middle East were read in Italian, English, Greek, Arabic, Armenian and Assyrian. A special mention was made of the need for peace in Jerusalem, which the pope called “the holy city beloved of God and wounded by men”. Pope Francis repeated his view that the “status quo” of the contested city of Jerusalem should be respected, and backed a two-state solution to resolve the Israeli-Palestinian conflict.
(Extracted from english.alarabiya.net)