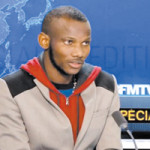 New York: Hailed as “the Paris kosher supermarket hero,” Lassana Bathily, a Muslim employee who saved 15 French Jews during a terrorist attack, was honoured in New York last month. Bathily was flown to New York to be honoured at the annual scholarship dinner of the NYPD Muslim Officers Society, the New York Daily News reported. Presenting him with an official city proclamation honouring him for his actions in the supermarket attack in Paris on January 9, New York Mayor, Bill de Blasio called Bathily a ‘real hero.’ Blasio said the 24-year-old Muslim hero “stood up to protect human life even when his own life is in danger,” The honour ceremony took place at the Islamic Center of Brighton Beach.