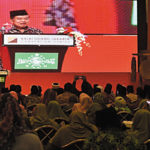 Indonesia’s Vice President Jusuf Kalla (on stage at L) delivers a speech during the opening ceremony of the International Summit of Moderate Islamic Leaders (ISOMIL) in Jakarta on May 9, 2016.
The country’s biggest Muslim organisation, the Nahdlatul Ulama, is hosting the two-day meeting in Jakarta of Islamic leaders from around the world, seeking to promote a moderate form of Islam. / AFP / ADEK BERRY (Photo credit ADEK BERRY/AFP/Getty Images)

Jakarta: Muslim leaders from around the world met in Jakarta recently to address the religious aspects of extremism and terrorism. The International Summit of Moderate Islamic Leaders was hosted by Nahdatul Ulama, an Indonesian Muslim organization that claims 50 million members worldwide. At the end of the summit, the participants published a “Jakarta Declaration” calling for an international coalition of religious groups and governments to dismantle the religious backing of extremism and terrorism. More than 300 religious leaders from 33 countries attended the two-day summit, including President, Joko Widodo and Vice President, Jusuf Kalla of Indonesia. “We gather here today to produce the solution to curb radicalism in the form of terrorism, wars and conflicts,” stated Jusuf Kalla. Indonesia is home to the largest Muslim population in the world, but since they have always coexisted with Hindus, Buddhists and Christians, Indonesian society has evolved a liberal, pluralistic brand of Islam. This approach, known as Islam Nusantara, or “Islam of the Archipelago,” could be a powerful force against radicalization.