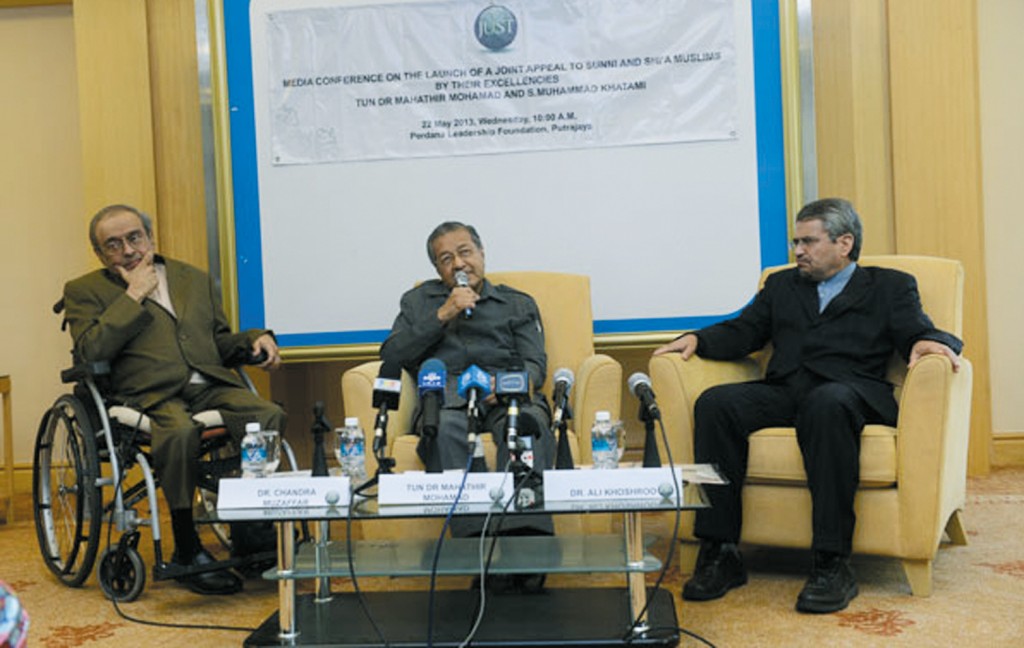 In an unprecedented move, two leading world Muslim statesmen, Tun Dr Mahathir Mohamad and former President of Iran, Seyyed Mohamed Khatami, have made a joint appeal to all Sunnis and Shi’as to stop sectarian violence and to desist killing each other.
Dr Mahathir, a Sunni and Khatami, a Shi’a are both signatory to the appeal which has been prepared in five different languages – Arabic, Persian, English, Urdu and Malay – will be sent and distributed worldwide with the hope that it would mark the beginning of putting an end to sectarian conflicts between the two Muslim sects which had resulted in the deaths of thousands from both divide.
At a media conference organised by the International Movement for a Just World (Just) here on May 22, the appeal, among others pointed out that the animosity between the two sects had weakened the Muslim ummah.
Just president, Dr Chandra Muzaffar said the idea of getting the two leading Muslims leaders to make the appeal started when he met Khatami in 2011 who was receptive to it.
“Following that, I met Dr Mahathir and he too was keen on the idea. Today, it has come to fruition,” said Dr Chandra who chaired the media conference.
Apart from Dr Mahathir and Dr Chandra, also present was Khatami’s special advisor Dr Ali Khoshroo.
Khatami delivered his address via a video recording and said that while differences were natural and even the Prophet said that differences were a blessing, however pointed out that “Islamicphobic matches with extremists and violent attitudes of certain Islamic groups with narrow and superficial interpretations of Islam.”
He said: “Divisineness grows into ignorant prejudice, leads to human disaster and loss of innocent lives.”
Dr Mahathir said the appeal was not pursuing to unite Sunnis and Shi’as but rather a pusuable objective, merely asking Sunnis and Shi’as to stop killing each other.
“Muslims must accept that the enemies of Islam are clapping their hands over the sectarian conflict as we are doing what they don’t need to do anymore.
“Believe me, when the enemies of Islam look at us, they do not identify us as Sunnis or Shi’as but as Muslims.
“We have to learn to live with our differences and tolerate each other. This appeal is not asking anyone to give up what they want to believe in. We are simply asking that they do not kill each other because of the different interpretations which had led to the different sects,” he added.
The appeal letter also suggested to the Organisation of Islamic Cooperation (OIC), which represents all Muslims of whatever sect or doctrine, to set up a task force that would examine the Sunni-Shia divide in depth and submit concrete proposals for the political and religious leaders of the Muslim ummah to act upon.