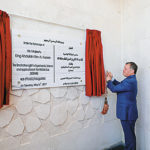 Balqa: Jordan’s King Abdullah opened the International Center for Synchrotron-Light for Experimental Science and Applications in the Middle East (SESAME), the first research center of its kind in the region. The center, which is located in Allan region in the Balqa Governorate, will contribute to developing scientific research in the fields of medicine, pharmacy, physics, chemistry, biology, materials science and others. The ceremony also included a documentary on the SESAME center that highlighted its importance as a scientific facility to exchange researches among scientists in a host of fields. Jordan was chosen as a venue of the center from among five countries that applied to host it. Construction work of the $100 million center started in 2003, after the signing of the membership agreement with other member states under UNESCO’s umbrella.