During the recent escalation of the Israeli-Palestinian conflict, Jews and Muslims in London sat down to break bread.
By Nabila Pathan 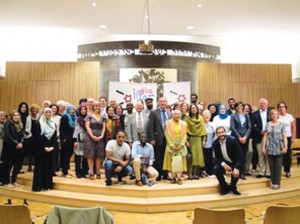 A UK-based synagogue hosted its first iftar with members of both the local Jewish and Muslim communities. As part of an ongoing nationwide initiative, known as the “Big iftar,” the breaking of the Ramadan fast took place in North Western Reform synagogue in London. With Ramadan being a time of reflection and peace, the Jewish-Muslim interfaith iftar at the synagogue, was a way for “Jewish and Muslim communities to come together in the UK to provide a light of hope for our co-religionists in the Middle East,” according to Mustafa Field, director of Faiths Forum London.
“Come into the synagogue with joy!” proclaimed Rabbi Maurice Michaels during the official introduction to the iftar. What followed was a consensus by the organizers towards a commitment of not letting troubles in the Middle East region negatively impact community cohesion in the UK between the two faith communities.
Laura Marks, senior vice-president of the Board of Deputies of British Jews, speaking to Al Arabiya News about the event explains: “it is these precise relationships which matter. We want our children to grow up knowing their neighbors and treating them as friends rather than with suspicion.” It was a night of mingling, feasting and coming together, based more on the commonality of the two Abrahamic faiths than on political differences. Following jovial greetings of “Ramadan Kareem” between the hosts and the guests, members of the two communities naturally mixed into conversation with each other. Experiences of fasting provided the platform for engagement; whether it was comparing Jewish and Muslim practices of fasting or sharing accounts of spiritual awakening.Throughout the evening there were regular reminders that “community cohesion does not happen by accident” reinforcing importance of such interfaith initiatives.
Source: http://english.alarabiya.net/en/life-style/art-and-culture/2014)