The science and technology award, which is being handed out for the second time this year, is given to Muslim researchers and scientists, as well as non-Muslim scientists residing in Muslim countries. 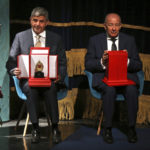 Turkish-French Sami Erol Gelenbe, right, and Iranian Mohammad Amin Shokrollahi, two computer science experts, hold their awards during the biennial $500,000 Mustafa Prize ceremony at Vahdat Hall in Tehran, Iran, Sunday, Dec. 3, 2017. The science and technology award, which is being handed out for the second time this year, is given to Muslim researchers and scientists, regardless of whether they live in Muslim-majority nations or elsewhere, as well as non-Muslim scientists residing in Muslim countries. (AP Photo/Vahid Salemi)

Iran has awarded the 2017 Mustafa Prize to two computer science experts, Turkey’s Sami Erol Gelenbe and Iran’s Mohammad Amin Shokrollahi. The Mustafa Prize was established by the Iranian government in 2015 to recognize leading researchers and scientists of the Organization of Islamic Cooperation (OIC) member states, as well as Muslim researchers from around the world. Sami Erol Gelenbe was was born on 22 August 1945 in Istanbul, Turkey. He is a descendant of the 18th-century Ottoman mathematician, Ismail Efendi Gelenbevi, who is credited with the introduction of logarithms in Turkey. In 1962, he graduated from Ankara Koleji and in 1966 from the Middle East Technical University. He is now at the Imperial College London. Gelenbe had a passion for fundamental research on the mathematical foundations for computer and communication systems, which lead to building better systems and improving their usage and performance. Mohammad Amin Shokrollahi was born in Iran in 1964. He received his German Diploma and his MSc in Mathematics at the University of Karlsruhe in 1988. He obtained his Ph.D degree at the University of Bonn, Germany, in 1991. Shokrollahi is now professor at École Polytechnique Fédérale de Lausanne, Switzerland. The work of Shokrollahi has led to breakthroughs in data transmission over packet-based networks that have resulted in global communications standards for mobile broadcasting, satellite data transmission, and Internet TV. The Mustafa Prize seeks to encourage education and research and is set to play a pioneering role in developing regional relations between science and technology institutions in OIC member countries.
(Reported by Sameen Ahmed Khan)