Teesta Setalvad, Human Rights activist and campaigner for justice for victims of anti-Muslim violence delivered the Henry Volken Memorial Lecture at the Indian Social Institute on July 12 on “A Republic’s Dilemmas: Constitutional Principles vs. Majoritarianism”. It also coincided with the Golden Jubilee celebration of the Institute in Bangalore. We reproduce the excerpts of the address. Editor 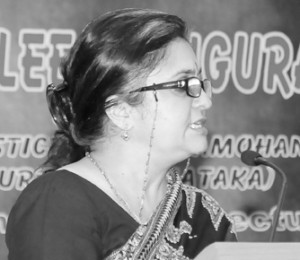 It is sixty three years since Independence and we need to decide ‘what should be done?’ and ‘what can be done?’ and learn to differentiate between the two. Signs of majoritarianism have been creeping into the polity since long and were clear from 1998. Today they seem to have entrenched themselves.
Free use of hate speech violates the article 153 A of the Indian Constitution but it took ten years for Election Commission to debar Bal Thackeray from exercising his right to cast a vote in the elections. And remember, this did not deter the Maharashtra Government from giving him a State funeral. He also had expressed his not having faith in democracy.
Not alone this, the State seems to be supine when it comes to taking action against merchants of hate in public. Narendra Modi had described the relief camps set up after the 2002 anti Muslim violence in Gujarat as ‘baby-making factories’ and Varun Gandhi dubbed Muslim vermin. He has been acquitted by the court and during the prosecution all 51 witnesses turned hostile.
Muslim cause for positive affirmation suffered a setback during the debates of the Constituent Assembly as Muslim leadership had been put on the defensive in the wake of Partition. Muslims should have been included among the socially and educationally backward communities (SEBC). They were assured of their interests being looked after well. But Patel clearly told that he did not trust Muslims. It is unjust to exclude Muslims and Christians from the reservation category for SEBCs as their poverty is too apparent to be missed. Moreover, caste is too deeply entrenched in the Indian social system and does not go away with the change of religion.
Politics of communalism is the worst tool to alienate a section of people. The Muslims are accused of lack of patriotism while the RSS even today has not reconciled to the fact of the tricolor being the national flag. It openly says that the national flag should have been saffron in colour.
Textbooks predominantly project majoritarian agenda. In Gujarat they say that Muslims, Christians and Parsees are foreigners. These textbooks do not tell the fact to the children that Babasaheb Ambedkar converted to Buddhism due to the caste-motivated oppression against Dalits. These books also miss out the story of Savitribai Phule who started the first all-female school in Bhilewada, Pune in 19th century and she was excommunicated from the community. It was Usman Shaikh, a Muslim who provided her shelter. The textbooks do not ask why Mahatma Gandhi, the man of peace was killed. Similarly, in Pakistan the children are taught history from Mughal period and the earlier era of Hindu dynasties and Aryan civilization, is given a go by. If these facts are included, the history would make the society fundamentally secular.
There are seven states in India which have enacted Acts under the name of “Freedom of Religion” which actually ban the conversion. This militates against the Constitution. But similar enthusiasm for enacting the law against targetted violence to check the communal riots and bringing in accountability among the officials responsible for maintaining the law and order is sorely missing. We had terrible bouts of communal violence since 1961 when Jabalpur riots broke the reign of peace. Nellie, Bhagalpur, Meerut, Hashimpura and Maliana, Mumbai and Gujarat, anti-Sikh violence in Delhi and expulsion of Pandits from the Kashmir have left a trail of blood and gore with sickening frequency. Yet the wheels of justice don’t move. No urgency is shown in pushing the Targetted Violence Bill in the Parliament. The law should introduce statutory reparation for the riot victims. Currently there are no standard reparations. Even violence against linguistic minorities too should be included in the Bill. Stringent action should be taken against the hate speech and hate-spewing writings. Eminent police officers such as Vibhuti Narain Rao and Rodriguez F. Ribero have opined that communal violence cannot continue for more than 24 hours unless the administration and the Government have the intention to let them continue.
Instead of these measures, we are being commandeered by majoritariansim. People who stand up for these causes are accused of communalizing the country. Same argument was used when agitation against reservation for OBCs was conducted.
Politicians have begun raising their political career on blatant majoritarianism. Mayaben Kodnani was seen distributing swords and trishuls among the people to attack Muslims. There were 14 eye witnesses against her. Chief Minister Narendra Modi was not shamed with all these. He rather promoted her in the cabinet. Everyone knows that Congress backed hoodlums were behind the massacre of Sikhs in Delhi after the assassination of Mrs. Indira Gandhi in 1984. Yet Congress was swept to power. Rajiv Gandhi gave ticket to three main accused minister H. K. L. Bhagat, Jagdish Tytler and and Sajjan Kumar. We cannot merely blame the Constitution and the politicians. Even voters behave the same way and elect politicians responsible for spreading communal hatred and violence. How much more shameful you can get by appointing Amit Shah as the chief campaigner of the BJP in Uttar Pradesh.
Democracy is not and cannot be reduced to brute majoritarianism, a crude game of numbers. In matters of conscience the majority has no place. The violence in Gujarat should deeply shake our nation’s conscience. The response of those indicted for state-sponsored genocide and their growing respectability and hold on positions of power should seriously question the writ of constitutional governance. It is knowing this, and accepting it without challenge that poses the most profound threat to Indian democracy today.
(Compiled by a Staff Writer)