“Let Us Pray for our Rohingya Brethren”, Says Pope Francis 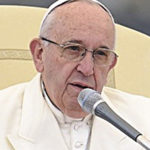 Head of the Catholic Church, Pope Francis has issued a stinging criticism on Myanmar’s harsh treatment of its Rohingya Muslim minority community, saying they had been tortured and killed simply because they wanted to keep their culture and Muslim faith.”They have been suffering for years”¦simply because they want to live their culture and their Muslim faith,” said the Pope, who is slated to visit Myanmar and Bangladesh between November 27 and December 2, where the Rohingya Muslim minority is suffering extreme persecution. In August, condemning atrocities committed by Burma, the Pontiff  urging worshippers gathered in St Peter’s Square in Rome to pray that God “saves” the persecuted minority. “I would like to express my full closeness to them. Let us all ask the Lord to save them, and to elicit men and women of goodwill to help them, for them to be given their full rights” the Pope said. He also advised:”Let us pray for our Rohingya brethren.”
(Extracted from www.siasat.com)