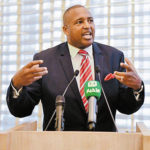 New York: The World Muslim League (MWL) recently hosted a conference in New York city focusing on the cultural communication between the United States and the Muslim world, with the participation of the United Nations, and the presence of 450 scholars and thinkers representing 56 countries under a forum titled, “Civilizational Communication between the United States and the Islamic World”. The Secretary-General of the Muslim World League, Sheikh Dr. Mohammed bin Abdul-Karim Al-Issa said in his speech that civilized communication between the Muslim world and the United States has a long history of exchange and cooperation of humanitarian knowledge, economic and political subjects. “This distinguished civilized relationship over the years has revealed the grave error of the “Clash of Civilizations” theory that was based on stirring up hatred and racism and erecting imaginary barriers,” Al-Issa said. “But what is important is our understanding of the need for co-existence and cooperation in the light of this understanding to serve not just mutual interests, but to also serve all humanity, to promote social peace and intellectual security and to defeat evil, while enshrining the concepts of righteousness, charity, all without religious, sectarian, ethnic, political, intellectual or other distinction,” Al-Issa added. Dr. David Nasser, senior vice president for spiritual development at Liberty University in Lynchburg, Virginia, said his Christian university promoted openness among students and encouraged them to communicate with Muslims in the US, who were also committed to religious principles that called for development and prosperity. The chairman of the General Authority of Islamic Affairs and Endowments in the UAE, Dr. Mohammed Al Kaabi, said Muslims believed cultural communication with the US should be based on the shared principles of Islam and the American constitution, which respect freedom, democracy and human rights. Secretary-General for the World Council of Religious Leaders, Dr. Bawa Jain said that the “process requires moving from a stage of accepting the other to one respecting the other”. n